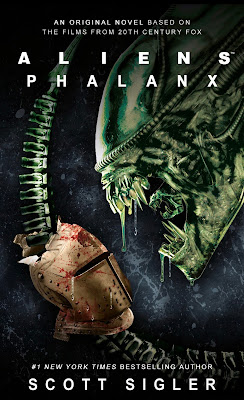 Scott Sigler is a successful contemporary novelist specializing in violent and futuristic, original novels, so it’s natural that he was green-lit for an Aliens tie-in story of his own. His 2020 entry in the universe is a stand-alone action paperback called Aliens: Phalanx that has been getting high acclaim from horror fiction aficionados.

Like the film Aliens, the novel showcases a tough female protagonist driving the action. Her name is Ahiliyah Cooper and she’s the 19 year-old crew leader of a group of “runners” delivering supplies and messages among the humans on a mountainous jungle island called Ataegina. The island is home to multiple tribes of humans living in underground medieval fortresses distant from one another. There was a time in the past when there was order in this kingdom, but things have pretty much gone to seed.

Many of the novel’s opening chapters are dedicated to world-building, and the author does a great job with the all expositional stuff. The island of Ataegina reminded me of Westeros from Game of Thrones if every faction lived in hidden shelters and travel among the tribes for trade was perilous. The paperback is intentionally vague about the island’s location in the universe. Is this an Earth of the future? A colonized other planet? An alternate historical reality? Answers regarding the novel’s setting are revealed slowly, and you won’t get any spoilers here today.

Unfortunately, the island is infested with Xenomorph Aliens that the humans call demons. As we join the action, Ahiliyah’s tribe lives and survives in the safety of their fortress shelter. They are cautious about going out at night when the demons do most of their hunting. Ahiliyah’s dream is to learn enough about the demons that one day the humans can hunt the monsters instead of the other way around. The only upside is that man doesn’t fight man anymore. The fiefdoms generally get along and engage in free trade. The common enemy of the demons did the trick of ending human war.

After returning from a trading run, Ahiliyah is informed by her leaders that she’ll need to immediately depart on another run with her crew. A sickness has befallen her people and the necessary medication is only available for trade across the island with another tribe. Of course, that means covering many miles on foot without being killed - or worse - by the demons who roam and hunt the island.

From there, adventure awaits. The author was clearly influenced by otherworldly fantasy novels as well as popular young-adult fiction, including The Hunger Games. There’s plenty of gore and adult content to keep the splatter fans happy as well. Some of the dialogue was a bit wooden and juvenile, but the action-suspense scenes were top-notch. The most interesting thing is how little the novel had anything to do with the Alien universe beyond the description of the demons plaguing the island. The upside is that if you know nothing about the Alien films or their extended properties, you can still have a fun time reading Aliens: Phalanx.

Like all contemporary novels, the book is too damn long at 500+ pages, and would have been more effective at half that length. This isn’t anyone’s fault because it’s a 2020 novel, and that’s just how long books are these days. To the paperback’s credit, it was never boring. Fans of action-adventure fiction will find a lot to enjoy in Aliens: Phalanx making it an easy recommendation for Paperback Warrior readers.