Challenge the Widow-Maker and Other Stories of People in Peril 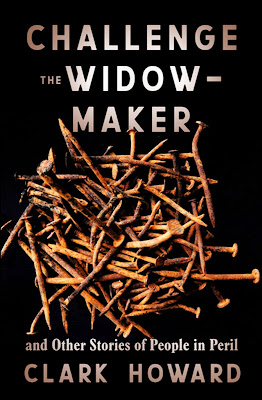 Clark Howard was a crime-fiction and true crime author that grew up as an orphan in Chicago's lower West Side. After surviving the Korean War's Battle of the Punchbowl, Howard became a full-time writer and a prominent contributor to mystery magazines like Alfred Hitchcock, Ellery Queen, and Mike Shayne. Thankfully, his estate has partnered with Mysterious Press/Open Road to offer two reprinted books collecting many of Howard's most well-known and award-winning short stories.

The first is Challenge the Widow-Maker and Other Stories of People in Peril and the second is Crowded Lives and Other Stories of Desperation and Danger. Originally these were released as rather unattractive hardcover editions in 2000 by Five Star Publishing. Mysterious Press/Open Road reprinted these books in 2020 with modern covers in ebook format. My first peek at these is Challenge the Widow-Maker...

The book contains 12 short stories, including Ellery Queen Readers Award winners like "The Dakar Run", "Scalplock", "Animals" and his 1980 Edgar Award winner, "Horn Man". Most of the other stories were all nominated for various awards, including two Spur nominees in "The Plateau" and "Custer's Ghost". After reading the collection, here are a few highlights:

This story was probably influenced by the author's fondness of jazz, a genre he discovered in southern America in the 1940s. In the story's beginning, a former jazz star named Dix departs a Greyhound bus in New Orleans. After talking with an old friend, Dix explains that he has been in prison for 16 years after taking the fall for a woman named Madge. He asks his friend where Madge is now and that he wants to see her. His friend isn't sure if Dix is wanting to rekindle a relationship with the woman or murder her. It's an entrancing story as Dix is courted by both a jazz club owner and his friend to pick up an instrument again. When a seasoned cop becomes involved, this 31-page story speeds to an interesting finale where the sins of the past come to light.

While this was nominated for a Spur award, it's not a traditional western. The story is set in a western town in the future. The last two living North American buffalo are owned by an old widowed man nicknamed Tank. The buffalo owner scratches out a meager living in a small Montana town with his daughter Delia. The state has created a lottery system where three winners will be allowed to hunt the last remaining buffalo in North America. But, when Tank realizes that one of the buffalo has died, he begins to gain a fondness for the remaining animal. Her name is Hannah and she's an old, female buffalo (cow) that has been in Tank's life for a long time. While he desperately needs the proceeds paid to him by the state, Tank attempts to smuggle Hannah into the rugged Black Hills ahead of the three hunters. The ensuing chase is a an exhilirating, and emotional read as Tank not only faces Hannah's extinction but also his own morality. It's an exceptionally well-written story.

Jack Sheffield is an aging race-car driver with a gambling addiction. Due to some bad luck, he's racked up a large debt owed to a French criminal named Marcel. One evening, his estranged daughter Chelsea appears and advises Jack that she's dating a race-car driver. She is requesting that Jack visit her boyfriend to review a super-car he's created for the famous, grueling race known as the Paris-Dacar Rally (today it's the Dacar Rally). It's an off-road endurance race that welcomes any driver and any vehicle. The event transpires across multiple countries, including a long stretch of the Sahara Desert. Jack has run the race before and lost, but his experience could prove valuable to Chelsea and her boyfriend. After Jack reviews the car, known as Max-One, he realizes it has a real shot at winning. The problem is that Marcel approaches Jack later and demands that he sabotage the car so that Marcel's large gamble on a marquee driver could potentially pay off. If Max-One wins, Jack's estranged daughter will benefit and his relationship with her could improve. If Max-One loses, Marcel will erase Jack's gambling debt from his books. I would love to reveal the surprise twist, but that wouldn't be fair to potential readers. This story was simply awesome and it possessed some of the same elements of Howard's stuntman novel The Last Great Death Stunt (1977).

Here is a complete listing of the book's stories and the original publication they were culled from:

Overall, Challege the Widow-Maker...should be in your Kindle library right now. If it isn't, please use the below link and remedy that problem.