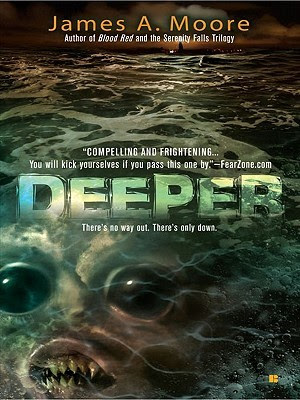 James Arthur Moore (b. 1965) is a Bram Stoker nominated author of horror, role-playing and television tie-in novels. The Atlanta native has multiple series titles, including Harvest and Bloodstained. After reading and enjoying his novels, Blood Red (2005) and Fireworks (2001), I purchased his 2008 novel Deeper. It was originally published by Necessary Evil in 2008 and then again by Berkley in 2009.

The book is set somewhere on the New England coast and stars an elderly man named Joe. Joe charters fishing trips for tourists on his sizable yacht and mostly lives a quiet happy life with his wife. A professor and members of a nearby college faculty hire Joe to pilot them to a beachside town called Golden Cove. It's here the group can dive and explore a chain of underground caves rumored to exist.

Joe wants to accept the job but is very hesitant about the route's ultimate destination. Over the years he has heard the sailor stories about the small coastal town. Supposedly, there are monstrous creatures that terrorize boats and crews off the reef. Additionally, rumors abound that the town's population behave aggressively to tourists. This isn't a cozy place where they leave the light on for you. When Joe ends up accepting the job, he discovers that the rumors are indeed true. There is a whole lot of terror waiting in Golden Cove.

Deeper starts with a bang and ends with a really strong finish. However, I though the middle portions were a little slow. The narrative features action, a central mystery and an eerie ambiance with Moore detailing the fog enshrouded village of Golden Cove. I imagined those opening scenes from the Dark Shadows TV show depicting a high tide enshrouding the misty beach. Moore connects to H.P. Lovecraft fans as this book mentions Innsmouth and the Miskatonic University (both locations used in Lovecraft's literature).

Overall, James A. Moore is a tremendous talent and Deeper is an entertaining read. If you love traditional horror or underwater terror, think of Deeper as a horrifying combination of Jaws and Cthulu.