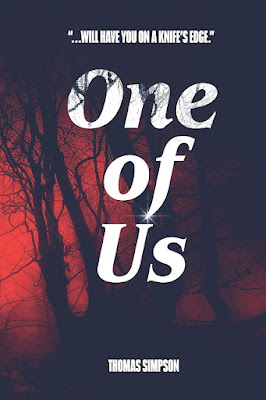 According to his Amazon home page, Thomas Simpson lives in Glasgow, Scotland. He wrote and directed the short film I, Alive, whose premiere took place in 2011. He is also a horror author with two self-published novels, One of Us (2019) and Blackened (2020). I borrowed a copy of One of Us from a friend, hoping for a good old-school novel about slashers.

Michael is slipping out of his daily office job. After taking some needed PTO, Michael heads out into the open air to soak up the sun, fish, drink beer and kill. That's right, kill. You see, Michael is a serial killer. He tortures and kills one person annually. After meeting Fred, both men formed a special bond that allowed them to enjoy this annual killing ritual. This year is pretty special. Michael is bringing his younger brother Jason to show him the ropes. Think of it as a gruesome internship. As a trio, they hope to earn a trophy in the wild.

While Michael, Jason and Fred are loading up for a vacation gorefest, Sarah is also looking forward to a vacation. She hopes the great outdoors is the remedy to heal her estranged relationship with her brother Kevin. They've recently lost their mother and are grieving. With two of Sarah's friends, the foursome arrive at the family cabin. With no electricity or cell phone service, these four may be the perfect prize for the killers.

It is clear that Simpson is a fan of horror, but above all a fan of the slasher subgenre. These three murderers (named after horror icons) attack a young woman before finding Sarah's friends. In addition, in the flashbacks, readers relive sessions of torture and murder of previous outings. These scenes are not for the squeamish. There are the mandatory chase scenes, the stigma of the final girl and the atmosphere and location of the classic outdoor slasher film.

With One of Us, Simpson creates the perfect horror novella, complete with compelling characters, a fast pace and plenty of grisly horror to please the diehards.