Make My Bed in Hell 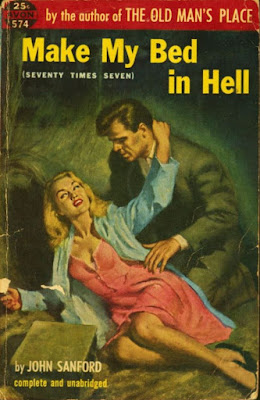 John Sanford (1904-2003) was born Julian Shapiro in Harlem, NY. After graduating from Manhattan's Fordham Law School, Sanford joined his father as an attorney, yet his career in law was short-lived after discovering art and literature by the likes of Ernest Hemingway. In 1931, Sanford authored his first novel, The Water Wheel, the first of three stand-alone titles that are set in New York’s Adirondack Mountains. This fierce and often opposing farmland was the perfect backdrop for the author's impressive storytelling. My first introduction to the author is his 1939 novel Make My Bed in Hell (aka Seventy Times Seven). In 1954, the book was published with misleading cover art as a crime-noir by Avon. In 2021, Brash Books has reprinted the book for modern audiences with an analysis by Cal State professor Jack Mearns.

While Make My Bed in Hell has a rather simple storyline, Sanford's presentation is very dynamic. In a rather unique and innovative style, Sanford writes the whole book as fragmented parts that are placed in various time periods. To add even more complexity to his prose, the author often doesn't identify which characters are talking. The reader is challenged to determine the dialogue's source instead of following a simple “he said” or “she said” formula. While I found myself perplexed at the peculiarity, the concept was a refreshing reading experience.

When the novel begins, middle-aged Aaron Platt walks a snowy path to his barn. It is there that he finds a frigid man lying in an empty stall. In what appears to be a rather cold-blooded response, Platt allows the man to shiver through the night with very little food or water. As night turns to day, Platt's past is presented to readers in jagged sequences. These are dark, extremely depressing visions of Platt's childhood, his endearing mother, and the brutality thrust upon his family by his aggressive and unyielding father. The harsh elements of childhood bullying, family abuse, death, and poverty is presented as a parallel portrait of a rugged, impoverished farming community that faces immense financial adversity.

Sanford really shined as a complex, but readable, young author that had a unique voice. Considering the wealth of literature I have devoured over 30 years, I've never read a novel like this one. Despite its 1939 conception, the book is seemingly timeless considering America's rural towns and communities that are still struggling with financial distress, lack of government funding, and an aptitude that fighting with each other is sometimes the best solution to life's most difficult oppositions. Sanford's characters are hardened by strife and the land they plow and that gritty combination affected me long after the final pages were read. Make My Bed in Hell is the main character's outlook on his tumultuous life and a fitting title for such a poignant literary novel.

Buy a copy of this novel HERE