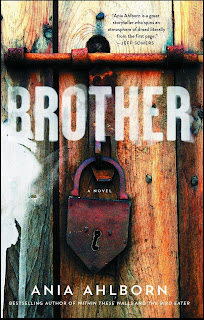 Ania Ahlborn is a contemporary horror fiction author born in Poland who emigrated to the United States where she earned an English degree from University of New Mexico. She writes disturbing novels from her Greenville, South Carolina home that have earned acclaim from the Horror Writers Association and a huge social media following of rabid fans. My first introduction to her work was her 2015 novel, Brother.

The year is 1980, and it’s time to meet the Morrows, the serial killer family at the center of the novel. Daddy Wayne is a Vietnam vet who handles the killing of female hitchhikers they bring back to their horror house in the woods. Momma’s own childhood trauma undoubtedly set the table for her own adulthood of bloodthirsty psychopathology. Their oldest kid is named Ray. He’s in his 20s now and prefers to be called Rebel. He gets off on tormenting his sensitive younger brother Michael, now 19. Meanwhile, Michael is protective of his sister Misty Dawn. There’s also another sister named Lauralynn, but we don’t even say her name out loud.

The Morrows are poor. Not like the urban poor we have today with smartphones and HD televisions. They are country poor. Appalachia poor. They make ends meet by shoplifting and collecting whatever trinkets they can find on the women they kidnap, torture and kill. The bodies are buried out back of their ancient, dilapidated West Virginia farmhouse sporting faded clapboards and filthy windows. They pretty much keep to themselves except when Rebel and Michael venture into town to stalk possible victims, steal food or chat up girls at the local record store.

Brother’s third-person narrative follows Michael, who, despite being a complicit member of a psychopathic serial killer family, is actually a very sweet boy. Through flashbacks, the reader receives glimpses of this awful family’s origin story, and it’s every bit the nightmare you’d expect. Older sister Lauralynn was the nice, compassionate girl of the bunch who looked after Michael when he was young. You’ll notice that she’s not present during the contemporary scenes, and the story of her departure from the Morrow house is doled out gradually as one of the novel’s central mysteries.

Brother is basically a bloody and gruesome coming of age suspense story about young Michael growing to understand his own dysfunctional upbringing in this messed-up family. There’s a puppy love story to enjoy and lots of abuse of Michael at the hands of his loathsome older brother. Throughout the novel, Ahlborn’s writing is exceptionally good and the pages fly from one atrocity to another. The book is a real bloodbath and incredibly compelling, but I didn’t find it particularly scary. Instead, the paperback presents a gripping suspense story that chooses to focus on the characters instead of the gore. By now you know if this is your kind of thing. If so, Brother is an easy recommendation.