Tip on a Dead Jockey 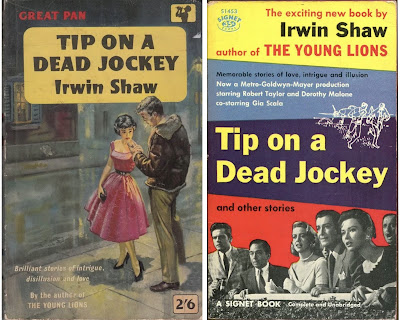 “Tip on a Dead Jockey” is the 40-page title story of a paperback compilation of Shaw’s short fiction from 1957. The protagonist is Lloyd Barber, an American WW2 pilot who has been bumming around Paris for the past 18 months since his marriage crumbled back home. Barber made some money working as a technical advisor on a Hollywood war movie filmed in Paris, but his savings are now declining.

One day a woman finds Barber and solicits his help. The lady is married to one of Barber’s war buddies - a fellow named Jimmy - who recently packed a bag and disappeared, abandoning his job and bride. Basically, she wants Barber to find her husband. Not being a detective or manhunter, Barber begins to seek out an older fellow named Bert Smith, who he met betting on horses at the track a while ago.

The story then cuts to an extended flashback taking the reader back to the relationship between Barber and Bert that began at the track betting on the horses. The two guys hit it off and Bert eventually makes the young pilot an offer: Fly a heavy box from Cairo to Cannes and make an easy $25,000. I won’t spoil what’s in the box or how it might tie into Barber’s missing war buddy, but the moral dilemma posed by the mysterious cargo is the centerpiece of the story.

Because “Tip on a Dead Jockey” is literary fiction from the New Yorker and not pulp fiction from Manhunt, the story’s ending isn’t particularly twisty or impactful. It is, however, satisfying and very well written. The original paperback is out-of-print, but the story is included in the 63-story collection of Shaw’s finest work called Short Stories: Five Decades currently available from University of Chicago Press. I read a few more of his stories, and he’s definitely worth checking out if expertly-crafted short fiction is your thing.