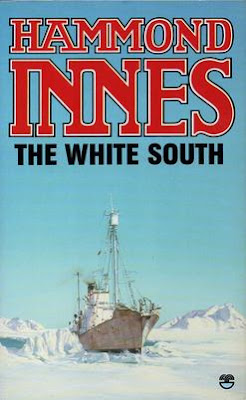 Many titles by Hammond Innes posses a nautical theme. From seafaring adventures like The Wreck of Mary Deare to oceanic oil rig thrillers like North Star, Innes explored the world searching for a great story. His mid-career novel The White South, published in 1949, takes readers to the frigid waters of the Antarctic. As both a survival tale and nautical quest, the book's synopsis promises an ice shaking boat disaster in giant seas. Go ahead and take my money. I'm sold.

Like many average males, Duncan Craig is no longer complacent with his suburban existence as a London desk clerk. In the Navy, he traveled the world, commanding a ship in WW2 and his heart is aching for a more meaningful and exciting life. After selling his belongings, Craig has a plan to move to South Africa. But, in a London airport, Craig's life changes dramatically.

After asking a favor, Craig is attempting to join a charter plane to Capetown. The flight is owned by the South Antarctic Whaling Company, but specifically Colonel Bland. After making his plea for one of the five seats on board, Bland willingly allows Craig to join them. On board is Bland's daughter-in-law Judie and an assortment of minor characters. Craig overhears that Judie's father works for Bland as a manager of sorts on a whaling ship. But, a conflict has risen due to Bland promoting his own inexperienced son Erick. Judie and Erick are married, but she hates the man and considers him a lying scoundrel who partnered with the Germans during WW2. The fact that Erick may pass her father in seniority makes her furious.

Eventually, Bland learns of Craig's experience with boats and makes him an offer he can't resist. Craig will command one of the whaling ships in the Antarctic sea. In the midst of the job proposal and hiring,  he learns that Judie's father mysteriously committed suicide by jumping overboard. Judie feels that Erick killed him, but that's a mystery that eventually expands. After inquiring into the details, Craig begins investigating the circumstances surrounding the man's death. Thus, Craig and Judie fall in love.

This is a nautical adventure and Innes spends some time acclimating readers on the whaling industry, which I found surprisingly interesting. Craig's inexperience is the catalyst for this educational journey, but eventually tragedy strikes. In the icy seas, Erick rams his ship into Craig's in a high-stakes deadly version of bumper cars. The two ships sink and the passengers are forced onto the ice. A rescue attempt then traps another ship between two icebergs.

The book's final 100-pages is a brutal cold weather survival tale as Craig orchestrates an escape attempt while contending with warring factions over supplies, injuries, and the few lifeboats remaining. He's an admirable hero that must overcome extreme adversity among men that don't necessarily respect his fishing inexperience. Thus, there's no surprise that Craig is the unlikely hero that rises to the occasion for the greater good.

There's a lot for readers to busy themselves with including memorization of who's who among the Norwegian names. Placing the characters and their locations on the ice was sometimes difficult. Because of that, the reading requires some focus and concentration to stay on task. It's not a heavy lift, but still requires minor endurance. If you love Hammond Innes, this is another stellar addition to his bibliography.