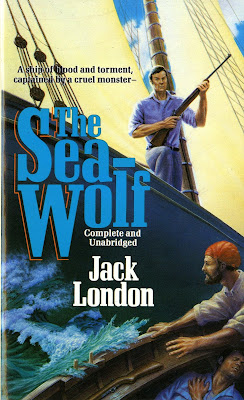 Jack London (John Griffith Chaney, 1876-1916) is one of those authors that populates every library or indispensable high school reading lists. As a kid, I remember reading his classic White Fang (1906) and promising myself that I would read more of his work. Over 30 years later, I finally decided to read another of the author's classics, The Sea-Wolf. It has been filmed 13 times and was featured as a series for BBC Radio 4 in 1991.

Humphrey Van Weyden is a newspaper columnist living in San Francisco. One afternoon, Hump is pleasantly boating off the California coast when he's rammed by a large schooner called the Ghost. The vessel is captained by Wolf Larsen, an abrasive individual that is described as highly intellectual and materialistic. Hump has the option of sinking, swimming, or hitching a ride on the Ghost. Unfortunately, he climbs aboard and quickly realizes he's in for a Hellish ride.

Hump declares that he wants a u-turn back to the coast so he can return home. Larsen refuses and orders that the ship continue its journey to Japan. Larsen offers to pay Hump to work aboard the ship and orders him to be a cabin boy. Hump resists but eventually his will is broken and he submits to long days of cooking, cleaning, and contending with a seasoned, very violent crew.

London provides some unique perspective through Hump's eyes. The excessive hard work and perseverance strengthen Hump. He realizes that he has been sleeping through life with his cushy desk job and a complacency to perform the most mundane tasks. As the narrative continues, Hump discovers that beneath Larsen's granite veneer, he is a literary scholar and possesses an atypical knowledge for math calculations and navigation. Because of the commonality, Hump and Larsen spend hours discussing books and art.

Eventually the abused crew turns on Larsen and attempts a mutiny. Larsen's tactical experience allows him to fight back against the crew, eventually torturing specific catalysts. Due to the violence and madness, Hump swears to kill Larsen. Things grind to a screeching halt when a woman, Maud Brewster, is rescued from the seas. Her background as a writer immediately connects with Hump. Together, the duo hopes to escape Larsen and his rebellious crew.

I really enjoyed London's novel and found Larsen (whom is the premise of the book's title) a multifaceted nemesis. The story has a couple of offshoots that I felt really solidified the storytelling: Hump's rivalry with a murderous cook, Larsen's vendetta against his brother, Hump's romanticizing with Maude, the arctic survival finale, etc. London's emphasis on Larsen's approach to life, work, and resilience provides so many great passages and quotes, my favorite being:

“Surely there can be little in this world more awful than the spectacle of a strong man in the moment when he is utterly weak and broken.”

I've read that The Sea-Wolf has similarities to Rudyard Kipling's 1897 novel Captains Courageous. London, who was proven to perform plagiarism, wasn't the only writer to use this plot. I would imagine there are a number of nautical novels with heroes that are trapped at sea with a tyrannical captain. But, I would say that Max Brand's (real name Frederick Schiller Faust) 1941 novel Luck of the Spindrift is nearly a carbon copy of The Sea-Wolf in terms of storyline. In Brand's novel, a San Francisco philosopher finds himself trapped on a ship headed to the South Seas. He has an interest in the only female on board and there's a devious captain to brutalize the crew.

If you enjoy more modern nautical adventures by the likes of Clive Cussler, Hammond Innes, Kenneth Bulmer and Patrick O'Brian, I think you owe it to yourself to read early 20th century novels like this one. Without these pioneering efforts, nautical fiction wouldn't have such strong and solid sea legs.