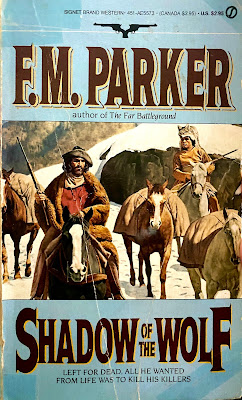 Shadow of the Wolf is the second installment in the Coldiron western series authored by F.M. Parker. It was originally published in 1985, one year after the series eponymous debut Coldiron. The series stars Luke Coldiron, a former trapper turned horse rancher in mid-1800s Colorado. There isn't much backstory required to enjoy the series, other than Coldiron has a friend named Cliff and that this book is set in 1864, one year after the series debut.

At the book's beginning, Coldiron and Cliff are attacked by horse rustlers during a bitter, icy period of winter. Cliff is unfortunately killed, but Coldiron kills the rustlers and promises to bury Cliff. Later, Coldiron is in Denver gambling and wins a long poker game with a rival. On his way back home to the Steel Trap ranch, he's overtaken by robbers and left for dead in a ravine. However, the robbers are quickly killed by two other robbers. It sounds confusing, but these robbers are explained in separate side-stories.

The first robber is a Native-American named Ghost Walker, a renegade who was ousted from his tribe due to killing a fellow warrior over a woman. With no land to call home, and a tribe that has erased him from existence, Ghost Walker settles down to live a solitary, yet corrupt life. The second robber is Jubal Clason, a Union soldier that kills his commanding officer in war-torn Virginia and goes AWOL to Colorado. It is here that he meets up with Ghost Walker and the two scheme to rob Coldiron's robbers. Later, the duo rob yet another group by killing a man and his brother, then take the man's widow captive. There is no shortage of murders and robbery in this book.

Shadow of the Wolf's second half is simply Coldiron trying to kill the men who robbed him. Along the way, he ends up freeing the woman and finds he has romantic chemistry with her (before her late husband's grave has even settled). While this sequel isn't as good as Coldiron, it still maintains a furious pace filled with a large body count and nearly endless action scenes (too many?). But, it is just enjoyable as Hell and makes for another fine western tale told by the talented F.M. Parker. I have no complaints and have high hopes to read the series third installment, Distant Thunder.