The Letter Death Wrote and Other Stories 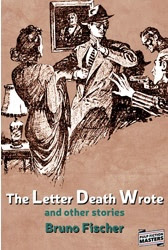 Bruno Fischer (1908-1992) was another popular author of the paperback original era who honed his craft with short fiction in the pulp magazines. Our friends at the Pulp Fiction Bookstore have released a compilation of Fischer’s pulp stories from that era titled, The Letter Death Wrote and Other Stories. Here’s a review of two selections reprinted in the new eBook release.

“Murder Turns the Curve” is an 11-page short story that originally appeared in the September 1948 issue of Popular Detective. The story opens in the aftermath of a two-vehicle car wreck with smoldering, twisted metal strewn across the road. Harry Shay is the young, rookie sheriff’s deputy dealing with the aftermath of the crash and the body of the unidentified woman killed in the accident.

Why would anyone take that blind curve so fast? Harry wonders. It’s almost like the driver was courting death. The unfortunate accident is one of several lately with fatalities caused by an epidemic of bad decision-making by drivers. Harry becomes convinced that there is more happening here than mere chance. Is it possible that there is a serial killer of sorts who is somehow orchestrating these accidents for some sick reason?

This is a very inventive police procedural murder mystery with a likable main character in Harry, who is fighting against the police establishment to test his unlikely theory. In short, a very satisfying quick read with a satisfying solution.

“A Grave is Waiting”

“A Grave is Waiting” is a 12-page story with origins in the September 1952 issue of Popular Detective – noteworthy because Fischer was already making a good living with paperback original novels at the time. The story begins with thoughtful private detective Ben Starke being forced into a car at gunpoint by two thugs insisting to know the location of a missing boy named George. Ben knows nothing about the kid and successfully escapes from his captors.

On the next day, Ben is hired by a woman to investigate a gang seeking to kidnap a 12 year-old boy named George. What are the odds? Ben seems to inadvertently have a jump on the case and the would-be kidnappers from his encounter the night before. The client is George’s legal guardian, and she has hidden the boy away until the kidnap gang can be neutralized. The boy’s parents are dead, and there’s a modest inheritance that the crooks want for themselves.

Ben suspects there is more to the story, but he takes the engagement since he already has some skin in the game. This leads to a violent and deadly confrontation with the adversaries where the truth of this plot is revealed. The solution is a dark and macabre treat that readers of sick crime plots will relish. Chalk this one up as another winner from this great vintage author.