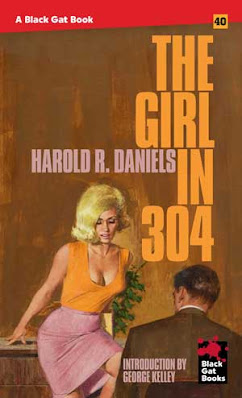 Harold R. Daniels (1919-1987) enjoyed a successful career as a technical writer and specialist in the metal industry. For 14 years he was the editor of the magazine Metalworking, but he also authored short stories for Ellery Queen Mystery Magazine and wrote six full-length novels. His first, In His Blood (1955), was nominated for an Edgar and hailed by the NY Times as the “best detective story of 1955”. The House on Greenapple Road (1966) was adapted into a film which spawned the short-lived Lt. Dan August television show starring Burt Reynolds. Thankfully, Stark House Press subsidiary Black Gat Books has published a new edition of his second novel, The Girl in 304. It was originally published by Dell in 1956 and now exists as an affordable paperback and ebook.

The Girl in 304 reads like a really good John Ball novel, emphasizing small-town politics while creating an engaging, thought-provoking narrative. These ideas were nearly perfected by Ball in his novels In the Heat of the Night and Police Chief. But, many authors like Harold R. Daniels (and William Fuller for example) were using this formula at least a decade earlier.

Edward Masters, the Sheriff of Clay County, Georgia (real place) and his deputies are called when a young boy discovers the corpse of a partially nude young woman in a heavily forested area. The woman received multiple stab wounds that led to her violent death. Rocked by this homicide, Masters immediately shifts into high-gear and notifies the state police for a lab technician and places the city's police department (his rival, county versus city) on alert. By page 25, readers are thrust into this engaging, irresistible murder investigation.

Daniels absolutely nails the procedural investigation, pulling his reader into interviews with suspects and the victim's co-workers, family members, and acquaintances. There's a deep dive into the girl's past, leading into some really dark places. The motive and killer was easy to identify early in the novel, but I think that was the point. It was Daniels' purpose to present an imperfect hero, a noble sheriff that is determined to find answers, but continually misses the clues to break the case. It's not a criticism of law-enforcement or of Masters, who is ultimately triumphant, but a look at just how difficult the cases are when faced with a number of suspects with sketchy alibis. There is also the resistance from the city's force to assist the county, a theme touched on most recently by Lee Goldberg in his fantastic crime-fiction novel Lost Hills (2020).

If you love crime-fiction with police procedural elements, then The Girl in 304 is definitely a must read. It has a tight story, swift pace, and doesn't lose itself completely in the details. With Daniels remarkable storytelling skills, this novel is a smooth, extremely enjoyable reading experience. Highly recommended.