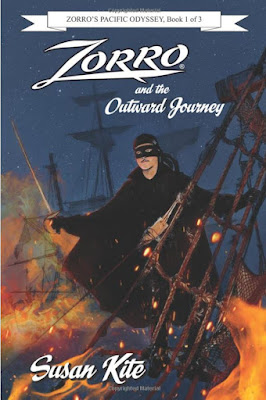 Johnston McCulley's Zorro character first appeared in “The Curse of Capistrano” (aka “The Mark of Zorro”), a five-part serial that debuted in All-Story Weekly on August 9th, 1919. For decades McCulley authored stories starring the caped crusader. Spinning off the pulps, Zorro became a pop-culture phenomenon in international television shows and films. Additionally, many authors have taken turns writing Zorro stories and novels, including Susan Kite. The Indiana native authored a trilogy of Zorro novels called Zorro's Pacific Odyssey. The trilogy's first book, Zorro and the Outward Journey, was published by Bold Venture Press in 2022 as both a paperback and ebook.

Don Diego de la Vega, son of the wealthy caballero Don Alejandro, lives in Mexican governed California in the early 1800s. By day, Diego displays a bit of cowardice to disguise the fact that he is the famed vigilante Zorro. After a series of attacks on prominent citizens perpetrated by terrorists, Zorro rescues a kidnapped child in the mountains. However, days later Diego is captured by the terrorist group, drugged, and then sold into slavery to a British ship headed to Singapore.

When Diego realizes what has happened, he is faced with his fate. The ship's Captain, a horrible individual named Beatty, explains that Diego is an indentured servant that has been purchased for two years of hard labor aboard the ship. When Diego explains the unfortunate incident of the terrorists, his background as an aristocrat, and the kidnapping, Beatty dismisses it as a fabrication. He soon realizes that Diego is quite different and places him as a trustee of the Spanish workers. Additionally, Diego is placed in care of the ship's Supercargo, a man named Bowman. Diego is fond of Bowman and the two quickly establish a father-son type of relationship.

As the first of a three book series, it is clear that this book is simply the journey. Zorro is being transported from A to B and must contend with the nefarious elements of the ship's crew and his limitations as a slave. I love prison-styled stories and this one certainly fit that sub-genre of men's action-adventure. What makes this such a compelling narrative is the fact that Diego can't transform into Zorro to fight his way out of the situation. He's trapped in a small space without the ability to don a disguise or do battle with a sword (he does later, but I'm not spoiling your enjoyment here). The fact that Diego is ultimately the hero makes this a unique Zorro story.

While Zorro on the high seas has been done before, Kite's version of this “fish out of water” adventure is very entertaining. It was also an emotional charge reading about the human condition - a panicked, desperate father hunting for his missing son. It was a really effective part of the whole story. There's also an expected cliffhanger that demands the reader to quickly buy the next book. Needless to say, my account has been debited and Bold Venture Press is shipping it out to me as I write this. Money well spent.