The Book of the Phantom Bullet 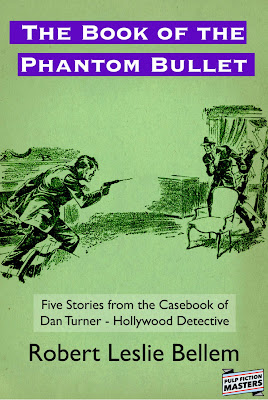 Dan Turner: Hollywood Detective was the popular creation of Robert Leslie Bellem (1902-1968) for many of the 3000+ (not a typo) stories and novellas Bellem authored for the pulps before he wrote for TV shows including The Lone Ranger, Adventures of Superman, 77 Sunset Strip and Perry Mason. Many of the Dan Turner stories have been reprinted as affordable ebooks, including 17-page “The Book of the Phantom Bullet,” originally from the December 1945 issue of Hollywood Detective Magazine.

As the story opens, Turner is on the set of a Los Angeles soundstage during a big-budget movie production. The star is a hammy actor named Ben McBride, who is repeatedly filming a scene where two co-stars shoot him at the same time, followed by a dramatic fall down the stairs. The director is dissatisfied with each take, and McBride is growing impatient. In the actor’s final attempt, he mimics getting murdered - quite realistically - because someone actually shoots McBride dead.

This is a great story, but the mystery of who shot McBride – or rather who loaded a real bullet into one of the prop guns – is secondary to the reader’s enjoyment. The real star of the show is Turner’s first-person narrative vernacular and the joy you’ll experience from swimming in his hardboiled slang. Eyes are peepers. A gun is a roscoe. Fists are maulers. A mouth is a kisser. Women are frails. And so on and so forth. Turner’s jazzy bebop is so fun to read. Check this out: “A slug tunneled all the way through his think tank and he’s deader than minced clams.” Pure poetry.

Because this is a pulp mystery story, we know that the killing of McBride is not some unfortunate accident. Turner begins looking closely at the prop man and both of the actors who simultaneously fired their guns on camera for the scene. Turner works closely with the police to get to the bottom of the matter, despite a vexing sub-mystery involving a missing bullet. The final solution was logical and satisfying with bonus points for a bloody and violent climax. What more can you ask for?

It’s been a long time since I had this much fun reading a short story from the pulp era. “The Book of the Phantom Bullet” was my first Dan Turner: Hollywood Detective mystery but it won’t be my last. Highly recommended.