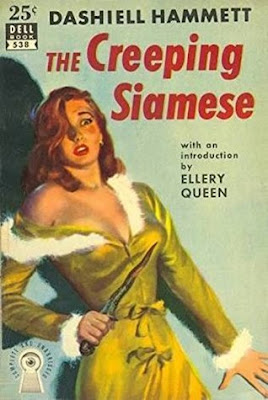 Dashiell Hammett (1894-1961) was a pulp fiction pioneer who authored enduring titles, including The Thin Man and The Maltese Falcon. For my money, his best recurring character was The Continental Op, an unnamed hardboiled PI on assignment from San Francisco's Continental Detective Agency. “The Creeping Siamese” was a story that originally appeared in the March 1926 issue of Black Mask that was later reissued as the anchor of a Dell Mapback paperback story compilation.

A tall guy walks into the Continental offices and immediately collapses dead onto the floor. An examination of the stranger reveals he was killed by a stab wound to the chest with the gory wound hastily dressed by a piece of silk that appears to be a sarong. The corpse's pocket contains a hotel key, and The Op’s boss dispatches him to the hotel to gather some intel. After all, it’s bad for business for unsolved murders to be happening in the lobby of a prestigious detective agency.

At the hotel, The Op learns the dead guest’s name but has no idea who would want to stab the poor bastard. The only relevant clue is the sarong, so The Op begins to scour the area for “Hindus” and “Brown Men.” Nearly 100 years later, the vernacular comes off as more quaint than offensive, but consider yourself warned if that kind of thing ruffles your feathers. The initial search for an “Asiatic” stabber produces no solid leads, but a lucky break introduces our hero to a clue indicating that the murder was conducted by a Siamese (we now call them Thai) guy.

The ensuing puzzle surrounds a mysterious package about the size of a bread loaf containing unknown contents worthy of murder – at least to the stabby Saimese. The solution, however, comes pretty quickly to The Op and seemingly out of nowhere. The clue that leads him to the conclusion just wasn’t credible to a reader with critical thinking skills. The whole endeavor felt rushed as if Hammett hit his contractual word count and needed to rush to the gym or something.

“The Creeping Siamese” is not a waste of your time, but it's an awful introduction to this vivid and normally hardboiled character. There was nothing particularly edgy or violent about the events, and it could just have easily been an Agatha Christie Miss Marple mystery story. The Op is normally a resourceful badass, but in this one, he was more Sherlockian. If you’re already a fan, you might as well check this one out. If you’re looking to read this awesome character at his best, check out “The House in Turk Street” and be prepared to have your socks knocked off.