Trilogy to the Stars #01 - Homeworld 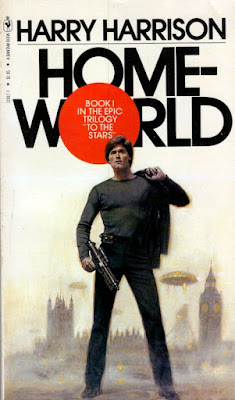 Science-fiction author Harry Harrison gained fans with his character Stainless Steel Rat in 1957. The character appeared in 12 total books. Additionally, Harrison wrote the novel Make Room! Make Room!, the basis for the 1973 film Soylent Green. My first exposure to Harrison's writing was Planet of the Damned, the first of two novels starring an Olympic-styled athlete that works for a peacekeeping interstellar agency. Anxious to read more of Harrison's novels, I selected the first in a three part trilogy titled Trilogy to the Stars. The novels were Homeworld (1980), Wheelworld (1981), and Starworld (1981).

Homeworld is set in the 23rd century and explains to readers that tremendous gains were made in the areas of development and space travel. Earth's one-world government was able to journey out beyond the stars to other planets for cultivating, scavenging, and manufacturing. With the 20th century's economy a distant past, Earth now lives in two classes – the elites and the proles.

The residents, like main character Jan Kulozik, exist on Earth in a privileged manner. They have the very best life has to offer with higher educations and a posh existence. Jan works as an engineer with an experienced background in computer networks, chips, and communications. He's a rich nerd from a generation of rich nerds.

The proles are Earth's slaves, working around the clock in manufacturing, mining, serving, etc. But, people like Jan don't realize that in essence, they are slaves to their privileged existence. They aren't aware that this system is dominated by a deceitful government that firmly establishes the two levels of civilization. It's a class-based existence with no hope for anyone born as a prole.

When Jan runs into an Israeli woman named Sara, he realizes that the government has lied. For decades the government has told its citizens that Israel doesn't exist. However, Sara is Israeli, and she educates Jan that in her country they are completely independent and free. Soon, Jan finds himself joining this resistance despite the fact that his brother-in-law is a prominent member of the government. Will Jan break the ties that bind and bring education to the people?

Homeworld is a fun book and mirrors many of the Dystopian-styled concepts that we've all read or watched. Jan's relationship with Sara is similar to Guy meeting Clarisse in Ray Bradbury's Fahrenheit 451. I imagine that this series debut is setting up a more action-oriented sequel as the story goes completely off-world. While it is science-fiction, Homeworld plays like a cat-and-mouse spy game as Jan works small assignments for Sara's government. There's a cross-country skiing adventure through the snow to free a prisoner and a space mission to disable a satellite. These things help to distract from the tight, cumbersome narrative of Jan just dodging government surveillance.

Both Homeworld and the other two installments were packaged in one omnibus under the title To the Stars. I'm on board to read the next installment to determine how Jan's adventures continue (considering the ending of this book). An off-world prison colony seems to be the next destination, but Harrison may throw something else in the mix. While I can't speak for the whole trilogy, Homeworld is definitely recommended.