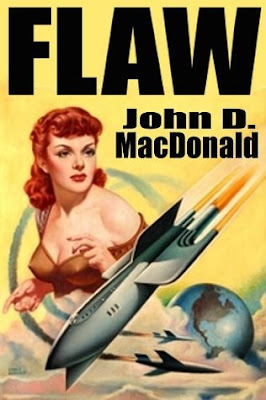 Before he was crime-fiction royalty, John D. MacDonald was a prolific, multi-genre author of short stories and novellas for the pulp magazines. His output included many science-fiction stories, including “Flaw” from the January 1948 issue of Startling Stories.

The year is 1964, and our narrator Carol Adlar is sadly looking back to 1959. That was the year she met and fell in love with an astronaut named Johnny Pritchard when she was working as a clerk at the Arizona Rocket Station. Johnny was committed to outworking his colleagues to earn the chance to go into space and eventually help colonize a new planet.

Love sometimes happens at inopportune times, and leaving the planet for 14 months is a helluva time to embark on a new romance. Nevertheless, Carol and Johnny fall madly in love with plans to marry upon his return to Earth. Unfortunately, five years has now passed with no sign of Johnny’s return flight home.

MacDonald’s writing is beautiful and heartbreaking as he assumes the melancholy longing of Carol’s narrative voice. He wrings every ounce of emotion from the loneliness and worry of an astronaut’s sweetheart. The downside is that the story’s punchline has been overtaken by our modern understanding of the solar system and space travel — facts we take for granted that were open to speculation in 1948. However, the emotional core of “Flaw” remains evergreen.

“Flaw” was reprinted in a MacDonald collection of his short science-fiction stories called Other Times, Other Worlds, available here