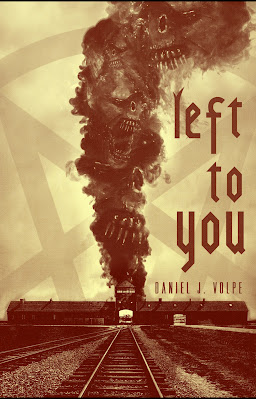 Independent American horror author Daniel Volpe created a critical hit in 2021 with his self-published novel, Left to You. The paperback combines a modern-day occult story with extended flashbacks to the horrors of a WW2 concentration camp.

The main protagonist is Robert Sinclair, a twentysomething stock clerk at a big box store who attends community college while caring for his cancer-ridden mother at home. He strikes up an unlikely friendship with an elderly Polish customer named Josef Lazerowitz who, we quickly learn, is a survivor of the Auschwitz concentration camp during WW2.

The reader is treated (?) to an extended flashback to Josef’s time at Auschwitz as a young man. There’s plenty of ripped-from-the-history books horror as the Jews are subjected to murder, torture and indignities at the hands of their Nazi captors. We also learn how Josef survived when so many of his cohorts did not. The dynamic between Josef and the camp leadership was one of the novel’s strongest attributes largely due to the questionable ethics baked into the situation.

There is very little supernatural horror here in the paperback’s first half. If you are good enough at math, you’ll begin to understand that there’s something weird happening with old Josef who does not appear to be aging normally. Leave it at that.

Once we learn how the death camp story ties into Robert’s contemporary story, we are fully in the muck of a gross-out, bonkers, demonic horror novel. The author does a nice job of creating a parallel between the monstrous choices made by men during the war and the real-life monsters of contemporary horror fiction.

This is a very compelling - but very grim - novel that is definitely not for everyone. It reminded me a bit of Stephen King’s Apt Pupil. You need to make peace with moral ambiguity and the idea that stories don’t always need to have a happy ending for everyone. The writing is crisp and you’ll never be bored. But, man, this isn’t for the squeamish. Consider yourself warned.