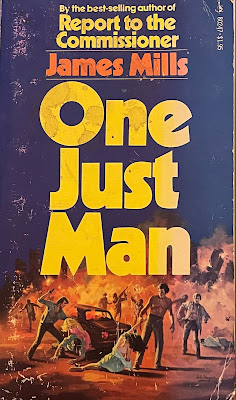 James Mills (born 1932) was a reporter and editor for Life Magazine who wrote eight stand-alone novels exploring how the seamy underbelly of urban America interacts with our imperfect criminal justice system. One Just Man was his third novel, originally released in 1974.

Interestingly, there’s nothing on the paperback’s back cover or inside flap that gives the reader any inkling of the novel’s plot. You’re forced to glean what you can from the chaotic and violent cover art. The paperback begins with a first-person narrator in the middle of a New York City riot. The scene then jumps forward to the same character rotting away in a cell in Attica prison. You’ll have no idea what’s happening, but the writing is so crisp and vivid, you’ll soldier on.

Things begin to take greater shape in the extended flashback that forms much of the main narrative. We learn that our narrator is Allan Dori, an independently-wealthy Legal Aid defense attorney who has dedicated his life to defending indigent (and mostly guilty) criminals. He recognizes the criminal justice system is broken because all he ever does is negotiate plea bargains for his clients with no regard for the actual guilt or innocence of the accused. None of the system’s incentives involve forcing the government to rise to its burden of proof.

Through these extended flashbacks, you begin to get the picture exactly how he landed in the slammer. I won’t spoil it here, but Dori devises a clever plan to turn the structure of the urban criminal justice system on its ear — with unintended societal consequences to follow. The idea is deceptively simple, and the ripple effect is huge.

This is a smart, but very grim, novel. It’s not the fun escapist story that the illustrated Pocket Books cover would have you believe. It’s basically a novelized thought experiment about what it would take to make the structure of the criminal justice system collapse as a precursor to the collapse of society. One Just Man is compelling, but no fun, if that makes sense. I also found the ending to be a bit abrupt.

Should you read this novel? Sure. If you are into the criminal legal procedural genre you’ll also find it to be an interesting read. If you’re looking for a post-apocalyptic shoot-‘em-up, it’s probably best to take a pass.