A Piece of this Country 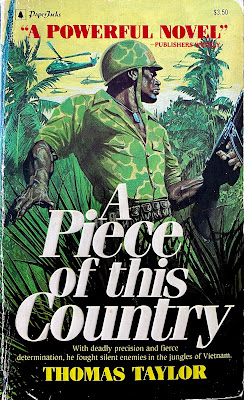 Thomas Taylor (1934-2017), a West Point graduate, was a Captain in the U.S. Army and served in the 101st Airborne Division during the Vietnam War. After an intense engagement with a Viet Cong battalion, Taylor was awarded the Silver and Bronze Stars as well as a Purple Heart. After his service, Taylor graduated from University of California, Berkley and became a writer. His work includes a number of non-fiction volumes on military history and combatants' first-hand accounts as well as fictional novels like A-18 (1967). My first experience with Taylor is his 1970 military fiction novel A Piece of this Country.

The paperback is set in 1965 during the U.S.'s early involvement in the war. Sergeant Roscoe Jackson is an African-American fighting with the ARVN (Army of Vietnam) near the Laos border. Jackson is a short-timer with just four months of active duty remaining before he returns to the U.S. As a husband and father of four, Jackson is anxious to leave the hot and steamy jungles and get back to Maryland. However, after being offered the dangerous job of overseeing the remote and isolated Fort Cougar, Jackson decides he wants to pursue an officer's rank. To obtain it, he'll need to work closely with a South Vietnamese leader to fortify the base and protect it from waves of Viet Cong.

Thomas Taylor's military combat experience is deeply ingrained into this violent and exciting narrative. Jackson tells readers that he keeps his matches inside of condoms, carries hornet spray and wears his poncho backwards. It's these little, descriptive things that make the story come alive with detail. The artillery fire, mortars and minefields are the book's soundscape, drowning Jackson in a sea of emotions as he contemplates his family's financial stress and discrimination back home in the U.S. Through mail correspondence with his wife, Jackson learns that she has a blood disorder and can't work. Further, his oldest son seems to have chosen a criminal path to overcome racial and financial struggles. Knowing that an officer's rank will pay more, Jackson's decision to re-enlist is a costly one.

Once Taylor arrives at Fort Cougar, he begins to formulate a strategy. His collaboration with Vietnamese commander Dai Uy Nguyen involves building escape tunnels while engaging the enemy on small jungle patrols. After numerous attacks on their ranks, Jackson begins to question Nguyen's allegiance. The book's fiery finale places the smaller American and South Vietnamese forces against wave after wave of enemies as they await aerial support from afar.

I really enjoyed so many aspects of A Piece of this Country. It contains so many memorable scenes. There's a powerful dialogue between Jackson where an enemy soldier tells him to leave Vietnam. He explains, “I'm trying to liberate my south. Why don't you liberate yours?” referring to Jackson's race and southern heritage. In another, Jackson explains that he has heard artillery fire so much that he isn't sure that weather-related thunder even exists in Southeast Asia. There's a humorous scene where Jackson trades two Mike Shayne novels to a fellow soldier in exchange for a nudie book. It's all of these realistic things that enhance the propulsive plot points and emotional characters.

If you love military fiction then you'll certainly enjoy A Piece of this Country. Anyone interested in Thomas Taylor's career and proud military lineage should check out both Taylor and his heroic father Maxwell Taylor's Wiki pages to learn more. I'm anxious to read more of this author's work.