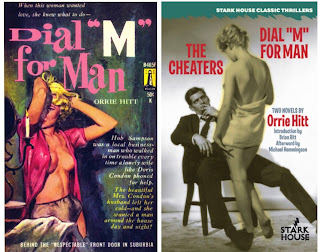 Hob Sampson is a TV repairman who is called out for a repair job. The lady of the house is named Doris, and she’s a real dish. Her way-older husband - Mr. Condon - is a crooked real estate developer who also serves on the board of directors at the bank that just rejected Sampson for a loan. He seems to be going out of his way to make Sampson’s life miserable. Upon arrival at the house, the seductive Doris is wearing a skimpy bathing suit, and her husband isn’t home. She’s super flirty, and Sampson is a man who knows what he likes.

You know and I know what eventually happens. Sampson isn’t immediately able to give her the tube she needs, so he agrees to come back to take care of her while Mr. Condon is out of town. There’s a lot of interpersonal stuff between Sampson and his virginal quasi-girlfriend and his deadbeat buddy that rounds the story out and gives Sampson the motivation to have Doris for himself.

If the story of a TV repairman plotting to kill a rich guy for his money and sexy wife sounds familiar, you’re not alone. It was also the plot to Gil Brewer’s paperback The Vengeful Virgin from four years earlier. In all fairness, Brewer’s novel was just a re-working of James M. Cain’s Double Indemnity, and the femme fatale story structure has been copied countless times since. While Hitt makes the story his own, he still probably should have made the narrator a plumber or a carpenter to make his borrowing of the plot structure more opaque.

As is often the case in Orrie Hitt novels, the reader learns a lot about the main character’s chosen profession. I find this stuff fascinating, and I now feel like I have a Masters Degree in TV retailing, reception and repair. In 1962, Hitt notably predicted that cable TV would be the future of America. (He did not, however, foresee Netflix Streaming.)

Dial “M” for Man was a total blast to read. The first-person narration from Sampson gave the reader a palpable sense of the lust and greed that leads an otherwise honorable man to make some deadly decisions. Hitt’s ending was also pitch perfect. With 148 books in his writing career, this is an author who should be viewed as a master of his lowbrow genre, and I’m happy that there are reprint houses like Stark House keeping his name alive.