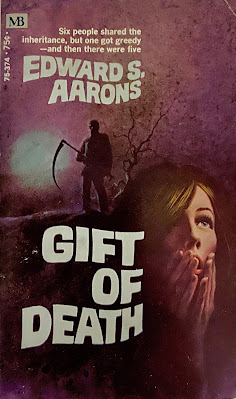 Edward S. Aarons' most recognized literary work is the 42-book Assignment series starring the globetrotting CIA agent Sam Durell. However, before that series began in 1955, Aarons authored a two-book series of crime-noir novels starring amateur private-eye Jerry Benedict. The first of the two books, No Place to Live (aka Lady, the Guy is Dead), was published in 1947 and introduced Benedict as a New York political cartoonist who is drawn into a murder investigation when he finds a corpse. The second novel, Gift of Death, followed a year later and moves the action south to a rural Connecticut farm. My first and only experience with the Benedict character is Gift of Death.

In the early chapters, Benedict is summoned to the office of Lucius McConaughy, the editor of The Globe newspaper where the two men work. McConaughy praises Benedict's sleuthing skills for solving the murder mystery found in No Place to Live. He explains to Benedict that his Uncle has recently passed away and a $600,000 inheritance is to be divvied up between himself and five cousins. Benedict's role is to determine who is potentially killing off the cousins to grab a bigger slice of the pie. After cousin Amanda's secretary was decapitated at the family's sprawling farm, McConaughy feels that the murderer was targeting Amanda and mistakenly killed her secretary instead. Benedict agrees to assist and the two travel to Connecticut to submerge themselves in a nest of cousinly vipers.

Aarons' narrative includes a Weird Menace sub-plot at the family farm. The old house is rumored to be haunted, a double-suicide occurred in one bedroom and there's a massive tree that was used for hanging in the early 1800s. Moreover, the unknown killer is attacking at night using a razor-sharp scythe as the killing tool. The author's macabre depictions of grizzly decapitation is combined with his trademark signature of sweeping Gothic imagery. Like Terror in the Town (1947) and The Net (1953), Gift of Death features a thick, foreboding sense of dread and doom. Aarons' drapes the story in old swaying oak trees, dark cornfields, moaning winds and positions the characters in eerie, ghost-like places such as hill-top cemeteries and abandoned summer cottages. Needless to say, Aarons' sense of décor and atmosphere is both stylish and effective.

If you like an old-fashioned, dense murder mystery, Gift of Death will surely be a pleasurable reading experience. Despite the spooky ambiance, I found the characters to be a little shallow and stereotypical undermining the core mystery. Benedict plays the proverbial 1940s detective well, interviewing all the parties while gaining liquid courage from mid-shelf bottles. It's a familiar, well-worn formula that doesn't hamper the narrative's momentum. Overall, I was glued to the story and didn't rush the reading just to pull the mask off.

Aarons' is such a masterful storyteller and Gift of Death proves that in spades. Highly recommended.