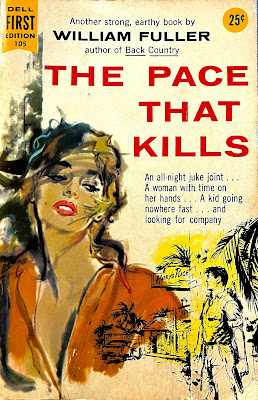 William Fuller was a merchant seaman, an infantryman and a drifter before becoming a full-time novelist in the 1950s. His claim to fame is the six-book series of crime-noir novels starring a Miami playboy named Brad Dolan who drifts along the Florida coast in a houseboat. Shell Scott author Richard Prather describes Fuller as “literate, hard-paced violence, remindful of James. M. Cain.” Aside from the Dolan series, Fuller wrote one stand-alone novel, The Pace That Kills (1956).

William Fuller's The Pace That Kills is a southern Gothic that mixes Paul Cain and Erskine Caldwell into a warped version of Thornton Wilder's Our Town. I didn't find much of it particularly interesting, but I appreciated Fuller's southern-fried style. It works as a small town scandal story or as a "heated, adulterous bedroom community with secrets" novel. If that's your sort of thing, then this is a recommended title. I was hoping Fuller would further develop Rivers' actual crime and the heist money that was tucked away in a secret place unbeknownst to the town. While that plot thread eventually comes to fruition, it's too late in the book to have a sizable impact. The end result is just another crime-noir novel that's written well, but is devoid of any real substance. Readers may want to just stick with Fuller's Brad Dolan series.