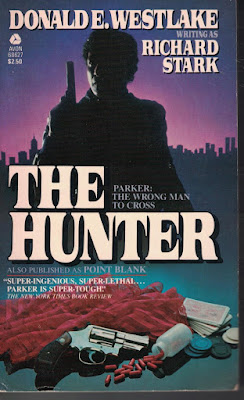 Donald Westlake had been writing professionally for several years when his first book as Richard Stark debuted in 1962. The Hunter (later reprinted as Point Blank) was a monster success and launched a 24-book series over the next 46 years with several movie adaptations along the way.

As the novel opens, Parker is pissed. He was left for dead in a post-heist double-cross orchestrated by his own wife and the novel’s primary adversary, a loathsome weasel named Mal Resnick. Adding insult to injury, the backstabbing lead to Parker serving a stretch in jail. The heist itself is a mere footnote to the plot as The Hunter is really a story of betrayal, vengeance, and settling accounts.

Even in this earliest iteration, Parker is a fully-formed, stoic violence machine. He’s like a Terminator in the famous sci-fi series - always moving forward towards the target. The physical descriptions of Parker as a big man with giant hands who doesn’t need a gun to kill are vivid and paint an intimidating picture of the legendary anti-hero.

By the same token, Resnick is a fantastic villain who inspires revulsion in the reader as Westlake fills us in on his own back story. The short version is that he betrayed Parker to steal Parker’s wife and $80,000 in heist proceeds to repay a debt to the mafia, famously known as “The Outfit” in the Richard Stark Universe.

As an organization, The Outfit is the third leg of the stool making The Hunter stand tall as one of the best crime fiction novels ever. Syndicate bosses set up shop in a hotel serving as a high-rise safe house for the mobsters to plan and scheme without fear of violence or the law. It’s an innovative idea borrowed decades later in the John Wick franchise of action films.

The Hunter is also the first in a trilogy of interconnected novels followed by The Man with the Getaway Face and The Outfit. After the first three paperbacks, the series generally showcases stand-alone Parker adventures with a few exceptions toward the end. As such, the first three books in the series should definitely be read in order. This shouldn’t be a hardship as they are all masterpieces.

But start with The Hunter. Don’t sleep on this book. If you read the book decades ago, do yourself a favor and pick it up again. It’s a reminder of how good crime-fiction can be. Highest recommendation.