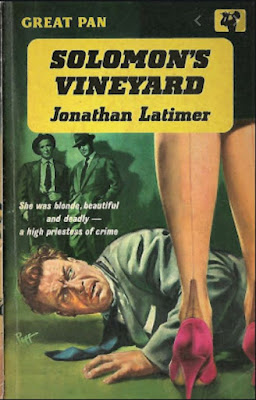 The legend of Jonathan Latimer’s 1941 novel Solomon’s Vineyard is likely more famous than the book itself. Here are the facts:

In 1940, Chicago journalist and crime fiction author Jonathan Latimer (1906-1985) wrote a hardboiled novel called Solomon’s Vineyard with lots of sex and violence. It’s about a hard-drinking private eye seeking to rescue a woman from a bizarre religious cult. Because of the era, no one cared about the boozing or considerable violence, but the sex (tame by today’s standards) made U.S. publishers nervous. As such, they declined to make the book available to American readers.

British publishers were more forward-leaning and released the novel in 1941, and it became a minor literary hit. In 1950, a censored version retitled The Fifth Grave was released for U.S. audiences with the juicy and scandalous stuff about the narrator’s sex drive (he’s drawn to female butts) removed. When cheap paperbacks became the rage, U.K.’s Great Pan books reprinted the original version - along with other Latimer books - to the further delight of British readers. Meanwhile, the uncensored version of Solomon’s Vineyard never received a U.S. printing until 1983.

In all fairness, it’s more likely that the novel merely slipped through the cracks rather than continued censorship by shadowy puppet masters. The publishing world can, at times, have short memories and resurrecting a novel that had been a hit in England four decades earlier just wasn’t anyone’s priority. It’s fun to say that Solomon’s Vineyard was “banned in the U.S. for 42 years,” but the truth is more benign. It wasn’t until 1983 before it occurred to a wise reprint house to release the unexpurgated original manuscript.

Since then, the novel has been reprinted multiple times as a paperback, ebook, and audiobook. You should have no problem finding a reading copy.

Karl Craven is Solomon’s Vineyard’s narrator, and he’s a private detective cut from the same cloth as Dashiell Hammett’s Sam Spade or the Continental Op. Think of this generation of fictional characters as Hardboiled 1.0 before Mickey Spillane redefined the genre.

As the novel opens, Craven arrives by train into the fictional town of Paulton from his hometown of St. Louis, Missouri during the sweltering summer heat. On his way to the hotel, he notices a distant set of buildings around a temple surrounded by green fields and grapevines. He’s told that the compound belongs to a religious colony known as Solomon’s Vineyard populated by a thousand crazies awaiting the resurrection of their dead founder, an alleged prophet named Solomon.

Craven was summoned to Paulton by his business partner, Oke Johnson, who was in town working a case. When Craven arrives at Oke’s rooming house, he’s greeted by the local police advising him that his partner has been murdered. Oke was trying to recover a missing girl from the nearby religious cult, and he died without leaving behind any notes or reports. As such, Craven needs to recreate the entire investigation himself, snatch the dame, and get away safely while solving Oke’s murder in the process.

What follows is quite a journey of sex, violence, and corruption. Paulton is a town under the control of a gangster named Pug with the police serving as his toadies. There’s a possible relationship between the local mob and the cult that may provide Craven the leverage he needs to rescue the girl living at the Vineyard. The adventure finds Craven descending into a series of real binds without an obvious path to success. Also, if you like a violent fight scene, the one at the end is total aces.

I have a general bias against crime fiction of the 1940s, but Solomon’s Vineyard is the exception. This book is awesome - even if it owes quite a bit to Dashiell Hammett’s Red Harvest. Craven is such a badass main character (he even reads Black Mask Magazine in his hotel) that I wanted to spend more time with the guy. Unfortunately, the author never developed Craven into a series character, but Latimer wrote several unrelated novels throughout his career. I look forward to exploring Latimer’s body of work more fully. Solomon’s Vinyeyard is a close-to-perfect novel. Highest recommendation.