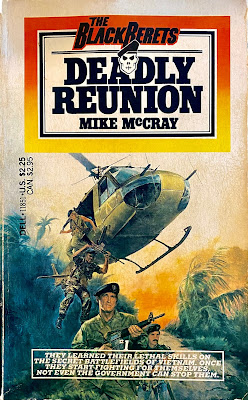 The Black Berets was a 13-book paperback series published by Dell between 1984-1987, a fertile time-frame for the men's action-adventure series industry. Dell was simultaneously publishing the post-apocalyptic series Traveler as well as the vigilante novels in the Hawker franchise. Therefore, it made sense for the publisher to include a team-based combat series in their catalog of offerings. The Black Berets was written by John Preston and Michael McDowell under the house name Mike McCray. Both authors were openly gay and authored a number of well-received gay-fiction novels. McDowell wrote movie and television scripts including Beetlejuice, The Nightmare Before Christmas and Tales from the Darkside. After enjoying the aforementioned Dell publications, I decided my team-combat reading could use some fresh faces. Camouflaged of course.

Beak, Rosie, Cowboy, Harry and Runt were utilized by the CIA as a special forces squad during the Vietnam War. After the war ended, the group disbanded and began living their separate lives. Billy “Beak” Beeker is the authors' focal point, the group's leader who is introduced in the opening chapters as a Louisiana Native-American who teaches at a private school while minimally living on large acreage. In the opening installment, Deadly Reunion, Beeker receives a call from the team's old boss, Parker. After an eight year hiatus, he wants to put the band back together again.

The next chapters are dedicated to Beeker reluctantly tightening his bootstraps once again and recruiting the original team members. After partnering with cocaine-cowboy and flying ace Sherwood “Cowboy” Hatcher, the two travel across the country explaining the team's new mission, and the reader learns the backstory of each member. All parties are hesitant to join the resurrected team and are skeptical about Parker's historically-shaky allegiances. The motivation for the reunion is that Parker informs the team that a former Black Beret member has finally been found. After going missing-in-action during the war, this team member has been spotted in a Laos prison. He's not dead but barely surviving off of meek rations among years of torture and abuse. Parker wants the team to penetrate Laos and rescue the man.

Deadly Reunion is like a really good Fawcett Gold Medal novel. The team reunites for a secret mission in hostile territory to recover something with the geopolitics updated to incorporate Vietnam. There's even the old heist bit thrown into the narrative to capture that vintage feel. I had some doubts about another 1980s team-combat series but instantly fell in love with these characters and the solid writing. Unlike other high testosterone action-adventure series, the authors dedicated time and effort to tell a realistic story about Vietnam Veterans. Many of the team members find themselves lost after returning home, haunted by the combat nightmares. Lost love, poor finances, alcoholism and drug abuse are part of the Black Berets narrative, and I found that vulnerability to be a more realistic approach than the typical barrel-chested brawny heroes of the 1980s.

Note: Author, editor and podcast host Paul Bishop has an excellent write-up on this series including each book's synopsis and vivid cover art. Check it out HERE.