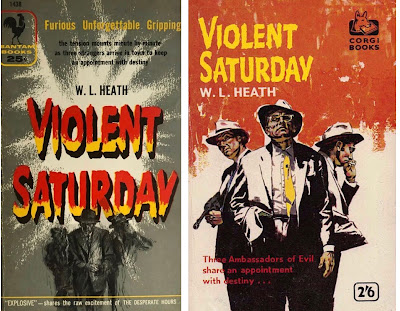 Arkansas-born William L. Heath (1924-2007) served in the U.S. Army Air Corps as a radio operator during World War 2 before earning a degree in English Literature from University of Virginia. After selling several short stories, his first novel, Violent Saturday, was published in 1955 and later adapted into a movie. The paperback has been reprinted several times and remains available as a $5 ebook or free with a Kindle Unlimited subscription.

The novel opens with three mysterious men arriving in Morgan, Alabama (Population: 4700) on a train from Memphis. They tell their taxi driver that they’re from the electric utility company, but that’s clearly nonsense. They register at the town hotel as Mr. Thomas, Mr. Blake and Mr. Brown, but I wasn’t buying that for a moment. What brings these three serious men to Morgan?

I suppose it’s not giving away too much to say that the three strangers are planning to rob the town’s bank. As heist plans go, this one of well thought out and logical. There are some uncharitable descriptions of black people that wouldn’t fly in today’s world, but I’m incapable of feeling outrage over words used by fictional characters 65 years ago.

The core plot veers off course fairly early as the author introduces the reader to a wide cast of townies - way too many for my tastes - but I was determined to stick it out to get to the actual Violent Saturday part. The myriad of subplots involving the lives and loves of the locals were a real snooze and definitely distracted from the paperback’s enjoyment, and they unfortunately make up the bulk of the novel. The heist and its aftermath are both plenty exciting, but you need to navigate through a lot of nonsense to get there.

If this was the only vintage heist book available, it would be an adequate genre paperback. However, we live in a world where the novels of Richard Stark and Lionel White are plentiful and cheap. Given the vast and superior options at your fingertips, don’t waste your time with Violent Saturday.