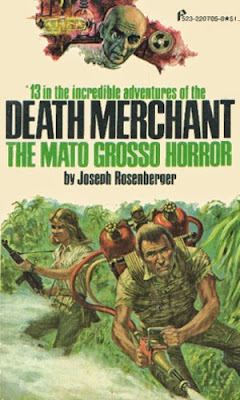 Popular men's action-adventure publisher Pinnacle added Death Merchant to their publishing catalog in 1971. The series was penned by Joseph R. Rosenberger and stars a CIA agent named Richard Camellion who uses a variety of disguises and weapons to infiltrate and eliminate enemy forces. The series ran 70 installments through 1988 and I periodically reading a random installment every few months. As such, I grabbed the 13th installment from my shelf, The Mato Grosso Horror, published in 1975.

Rosenberger uses a tried-and-true staple of men's action-adventure as the basic plot. The concept, used quite frequently in pulps and magazines, is that Nazis escaped Germany at the end of WW2 and emerged years later in secluded, exotic locations. These Nazis still swear allegiance to Hitler and haven't abandoned their quest to enslave the human race. To further their cause, the Nazis have mutated villagers and natives into freakish super soldiers that they hope to use as the Fourth Reich's secret weapon. Taking all of this into consideration, the Death Merchant has been ordered to enter the steaming jungle of Brazil to eliminate the newest swarm of jungle Nazis.

The narrative has Israeli intelligence reporting the quest for Reich Glory stemming from the vast, mostly unexplored Brazilian interior of Mato Grosso. Richard Camellion partners with a squad of American Green Berets to enter the jungle and destroy the Nazi lab. In doing so, the author places the Death Merchant in precarious situations fighting a cannibal tribe for weeks. In fact, nearly every chapter of this installment features Camellion and his allies fighting tribal enemies – like wave after wave of tribal enemies. This is really fun for a few chapters, then becomes an endless game of Duck Hunt as Camellion mows down the baddies.

The Mato Grosso Horror is a fun, action-packed novel that features a weak enemy simply being assaulted and killed by the Death Merchant. If that's your thing, then by all means you'll absolutely love this early series installment. I'm complacent enough to enjoy a mass slaughter twice a year and this adventure surely delivers the blood 'n guts one would expect from a long-running kill 'em all series like this one. Death Merchant wins...again.