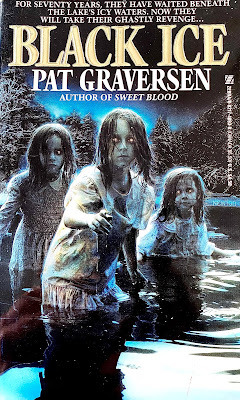 Pat Graversen (1935-2000) began writing horror and suspenseful short-stories in the late 1970s. Her first novel, Invisible Fire, was published by Fawcett Gold Medal in 1981. She later signed with Zebra Books and authored a number of “child in peril” horror novels including Dollies (1990), Stones (1991) and Sweet Blood (1992). I have owned her 1993 novel Black Ice for a number of years, and finally took the time to read it.

This horror story begins where most horror novels begin – the old Satanic ritual routine. In the prologue, three kids in 1928 climb into a dark dusty attic and perform the ritual inside of a scrawled out pentagram using chicken blood, an upside down crucifix and black candles. Afterwards, one of the kids is possessed into some sort of demon that makes him an invalid for the rest of his life.

In the opening chapters, single-mom Cassandra “Cassie” McCall and her eight-year old son Jess arrive in the sleepy town of Winter Falls, Connecticut. Throughout the book Cassie remembers growing up in the area and experiencing a harsh and physically abusive relationship from her father Colin (he was one of the creepy Satanic blood-slurping kids from the prologue). Colin's heath has deteriorated and now he's an invalid living at the local hospital. Cassie, in dire straits financially, uses this opportunity to return home for a fresh start.

Winter Falls is haunted by an old children's tale of three little girls who drowned in the town's lake. Through the years, their rotted corpses are seen sporadically by horny teens and delirious old men. While playing too close to the lake's center, Jess falls in and becomes trapped under the ice for 20-minutes. After he is resuscitated, both Jess and Cassie begin experiencing strange connections to the lake. Through Jess, readers learn that the three dead girls have awakened and they summon him to do bizarre things. Once the town's citizens begin drowning on dry land, Cassie realizes that her invalid father may have a connection to Winter Falls' ghostly tale.

This is my first experience with Pat Graversen and I find that her writing style is similar to Ruby Jean Jensen. In fact, both authors were similar in age and each of them authored “child in peril” horror novels for Zebra. Considering satanic rituals, drowned kids and a five-fingered body count, one would assume Black Ice is scary. It isn't. Instead, the book's strength is the portrayal of Cassie as a single-mom and her unwavering bond with Jess. The chapters became fairly predictable as Jess frequently disappears and both Cassie and her love interest search the woods and lake for him. There's a little mystery thrown in about a secret locked box but it wasn't the grand revelation the author probably intended.

Black Ice is a suitable 1990s horror offering from a publisher that seemingly perfected these types of genre novels consistently month after month. If you enjoy John Saul and the aforementioned Ruby Jean Jensen, you'll probably love this traditional ghost tale. At 255-pages, the narrative is a little slow but builds in enough atmosphere and engaging characters to keep the pages turning. It isn't a mandatory read, but a good way to waste the day.