Bodies Are Dust (aka: Hell Cop) 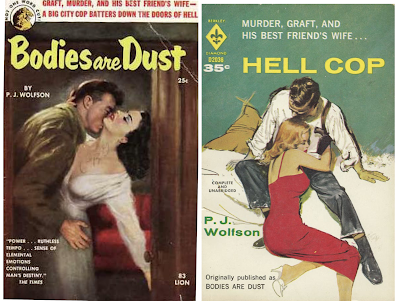 Bodies Are Dust (aka: Hell Cop) is a nasty little crime noir novel from 1931 that’s been out-of-print for over 60 years. A new imprint called Staccato Crime (a division of Stark House) has resurrected the collectible rarity by the pharmacist-turned-author-turned-screenwriter Pincus Jacob Wolfson (1903-1979) for a 2021 reprint. The book contains informative essays by Jeff Vorzimmer and David Rachels on the paperback's historical context.

Our narrator, Inspector Buck Saffiotte, is a big city police detective hooked on booze, babes, and graft. He’s a political animal who was hoping to be police commissioner until a recent election broke in an unexpected direction. For now, he’s running a station house in the city’s theater district, a neighborhood riddled with speakeasies and whorehouses. His partner is a Jewish cop he calls The Yid, and Saffiotte is emotionally abusive to his housekeeper. He forces her to serve him breakfast every morning along with whatever whore spent the previous night with him.

Saffiotte is a real sonofabitch, but he’s also our guide through this 200 pages of depravity - so you better learn to live with him. The unnamed city is a character unto itself, and it reminded me of the Frank Miller graphic novel (and movie) Sin City. It’s a rat-filled, fetid sore of a slum where Italian immigrants sell rotting vegetables on busted pushcarts. Wolfson’s descriptions are vivid and stay with you as the pages fly by.

In the novel’s opening half, we follow Saffiotte through a morass of characters involved with frauds, swindles, sex and graft. It was all very compelling, but nothing resembling a storyline develops until the paperback’s second half when our anti-hero gets involved with The Yid’s new wife. There’s also a fixed boxing match, a bank embezzling fugitive, and an old friend’s death to be avenged. It’s all rather compelling, but it still doesn’t equal much of a plot.

Overall, Bodies are Dust was a solid read considering it is a 1931 novel. For my money, I still prefer 1950s noir, but it’s fair to view this one as a hardboiled classic from an era when the genre was still finding its feet.