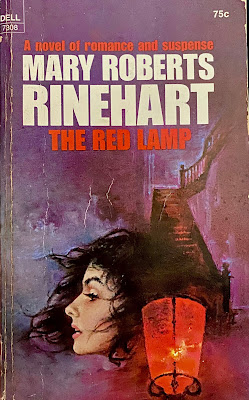 Often called the American Agatha Christie, Mary Roberts Rinehart (1876-1958) wrote over 50 novels, most of which are considered traditional murder mysteries. She's often credited with inventing the “Had I but Known” mystery style where the chief protagonist conducts behavior that is connected with a crime, thus prolonging the action of the story. She's also noted for the phrase “The butler did it” from her 1930 mystery, The Door. My first experience with the author is her 1925 novel called The Red Lamp, also known as The Mystery Lamp.

Presented as a rather lengthy journal, The Red Lamp's premise is the haunting of an enormous mansion called Twin Hollows. The journal's author, William Porter, inherits this sprawling mansion in a rather mysterious way. His uncle Horace was found dead inside the mansion apparently in mid-sentence of a letter he was penning to someone. His death is suspected to be an accidental fall, but there's a sense that foul play could have been involved. William and his wife Jane decide to spend the summer residing in the mansion's guest house. They later rent the mansion to an elderly man named Bethel and his steward named Gordon.

This kick-starts a supernatural whirlwind of murder, intrigue, and deception.

During the initial weeks of both William and Jane living in the guest house, there is a mysterious outbreak of sheep murders. Later, strange signs are found painted around the house and surrounding areas depicting a circle with an inner triangle. The first deaths begin with a local cop investigating the slayings followed by more people with close ties to Porter. As the deaths, attacks and strange occurrences continue, the common denominator is the house itself. Porter and various caretakers and staff experience ghostly apparitions and noises that seem to be transfixed on a red lamp that casts a bloody hue on the house. Are these apparitions of a supernatural origin? Or, is this town and it's inhabitants spiraling into madness?

The Red Lamp is a hybrid of horror and mystery, never consuming either genre but lying somewhere in the fringes. The claustrophobic, paranoia aspects of Porter's mind saturates the narrative, again simply a diary in its presentation. Like Lovecraft, this cold, unsettling fear erodes the sanity of the book's central character. The unnatural nightly noises and the lamp's omnipresence captures the essence of a truly disturbing horror novel. However, Rinehart attempts to lighten the mood occasionally with Porter's sarcasm and self-parody of his own situation.

Whether the book is a dense, slowly evolving mystery or a horror tale is in the eye of the beholder. While I found the book longer than need be, I still found myself drawn to this eerie, freakishly compelling novel. At 250-pages of smaller print, it's a good workout for committed readers. My first Rinehart experience was rewarding enough to warrant the purchase of three more of her books – The Circular Staircase (1908), The Window at the White Cat (1910) and The After House (1914). In other words...look for more reviews of her work in the coming months.