Dive in the Sun 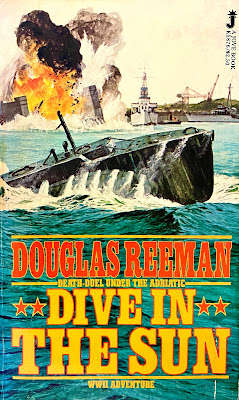 Douglas Reeman (1924-2017) is a British author of nautical fiction, mostly about the Second World War. Before becoming a writer, Reeman served as a Midshipman at the young age of 16 and participated in heavy combat in the North Atlantic and was present at D-Day. He was injured twice during the war before joining the Metropolitan Police and later the Royal Naval Reserve, where he remained Lieutenant-Commander. In early 1958, Reeman launched a successful career writing realistic nautical adventure stories, some under the pseudonym of Alexander Kent. My first experience with this author is his second novel, Dive in the Sun, originally published in 1961.

Lieutenant Ralph Curtis' mission is to pilot a miniature submarine on the Italian coast to detonate a massive dock used for German infiltration and deployment. Three men will provide assistance to Curtis - Duncan, Taylor and Jervis. Once the wharf is ready to explode, Curtis will retreat from enemy waters and end up with a larger transport submarine. This mission will require supreme leadership, but Curtis is in doubt due to the recent loss of one of his men in battle. Feeling responsible, Curtis now struggles with weariness and self-confidence in his own abilities.

The first 50 pages of the book carry out the mission as well as the initial retreat. However, having planned the exit incorrectly, the miniature submarine is damaged. With no periscope or radar, the men decide the best course of action is to go further down the coast, beach the submarine and take their chances on foot hoping that Allied forces will begin a coastal assault and eventual rescue. The middle chapters of the book focus on Jervis captured on the coastline and inevitably questioned by Italian and German forces. Hoping to free Jarvis, the three men find an unlikely ally in a young Italian woman with a secret agenda.

As one might expect, Reeman's writing is permeated by realism and gravelly violence. Before going into the book, I hoped that the technical aspects of underwater nautical service would not take precedence over the rapid adventure of WW2. Fortunately, Reeman keeps the plot propelling forward with many changes in the story and the locale. From the initial shore survival mission to a swirling nautical adventure, Reeman delivers the action in spades.

I also found Curtis's imperfect character intriguing. The emotional rollercoaster he had to endure in terms of loss, regret and self-doubt were extraordinary. His chemistry with the three men, the mysterious woman and the decisions he is forced to make solidified what was already a strong story.

In terms of comparison, I would speculate that this particular book could be compared to Hammond Innes - imperfect hero, war-related plot, nautical adventure, sweeping locales, etc. But, most of these tropes could be attributed to any of the high adventure style writers of the early to mid-twentieth century. In this case, Douglas Reeman is another wonderful voice to turn to when you're looking for the next great adventure novel.