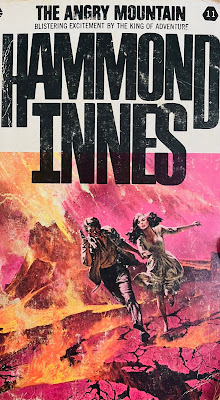 From 1937, Hammond Innes launched a career as an iconic writer, which dominated him as a cornerstone of high adventure fiction. Averaging a book per year, The Angry Mountain was the author's 14th novel, originally published in 1950. The book uses the natural disaster subtype of action-adventure, this involving an authentic volcano called Mount Vesuvius.

In The Angry Mountain, Innes features former Royal Air Force pilot Dick Farrell. In WW2, Farrell fought the Germans only to be shot and captured along with his comrades Reece and Shirer. As a prisoner of war, Farrell was brutally tortured at the hands of a German surgeon. After an immense barbarity, Farrell's leg was cut off at his knee. Reece and Shirer broke out of the camp and Farrell was liberated at the end of the war.

At present, Farrell is working for a British machine tool company. The company sends him to Czechoslovakia where he meets a former British intelligence agent that he worked alongside with during the war. After a strange sequence of events, Farrell discovers that this former agent is taken into custody as an enemy of the state. After being questioned by the communists, Farrell finally travels to Italy to convey a message to Reece and Shirer. But once there, he realizes that his German tormentor is still alive and has taken the identity of Shirer.

Needless to say, there are a lot of dense storylines that prevail throughout The Angry Mountain. Farrell's memory of the atrocities of war, his disability due to the torture and his personal anguish on failing his countrymen all tie into his paranoia that somehow this German torturer has returned to his life. The bulk of the narrative features Farrell spending his days with a beautiful dancer named Countessa Vale as the two frolic through the countryside. Eventually, the entire cast of characters ends up in Vesuvius where the active volcano erupts.

The first half of The Angry Mountain introduced a diamond smuggling scheme that I really expected to take off. Instead, the book's second-half is a frantic escape from the volcano as Farrell is forced to become the hero and placed in a position to recover the sanity that he feared was once lost. In many respects, Farrell is the same kind of imperfect hero that appears in a number of Hammond Innes novels, only this one both emotionally and physically endangered.

As a compelling read, Hammond Innes delivers a smooth prose that easily flips the pages. Although not a masterpiece, The Angry Mountain has enough story, character development, forward motion and mystery to keep it interesting. For that reason, it is well worth your time.