Luck of the Spindrift 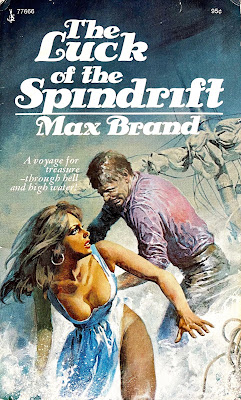 Although Frederick Schiller Faust (1892-1944) used pseudonyms like Walter Butler, David Manning, Even Evans, and George Baxter, he’s mostly known as Max Brand. As a cornerstone of western-fiction, Faust’s popular western stories and novels as Max Brand have been idolized by genre fans for 100 years. Outside of the genre, Faust (as Brand) authored the Dr. Kildare series as well as a handful of historical swashbuckling novels featuring a character named Tizzo. Also, as Brand, Faust wrote the nautical adventure novel Luck of the Spindrift. It was originally published in 1941, just three years prior to his death during WW2.

In Luck of the Spindrift, readers are introduced to Samuel Culver, a philosopher and graduate from Harvard. In the opening pages, Culver is working a blue-collar job at a shipping warehouse. After being fired by his employer, Culver dwells in his one room San Francisco apartment surrounded by hundreds of books that he’s collected and studied. Later, he runs into a stray dog that has become separated from its owner. Little did Culver know that the dog was about to take him on a nautical journey to the majestic South Seas.

Asking around about the whereabouts of the dog’s owner, Culver is led to a docked ship called the Spindrift. On board, various crewmen suggest that the dog belongs to a man named Valdez. Before Culver can gain a better understanding of Valdez’s location he’s knocked unconscious and dragged below deck. Awakening hours later, Culver realizes he’s in-route to the South Seas with the criminal crew of the Spindrift.

Brand’s nautical adventure is mostly spent with Culver befriending some of the crew and later learning to work for Burke, the ship’s devious captain. At 200 pages, three-fourths are spent with simple day-to-day activities on the ship. Authors like Calvin Clements and Hammond Innes can make these occupational details compelling. Unfortunately, Brand’s prose lacks some interesting aspects other than a violent flogging.

Despite Luck of the Spindrift promising high-seas adventure, the narrative is mostly a slow-burn with a lack of real action or a logical story. Often I found myself confused regarding the purpose of Valdez and the purported treasure. If you enjoy nautical adventure, Brand’s novel may be tempting. Buyer beware, there’s not a lot to really absorb or enjoy. Stick with Brand’s well-respected western storytelling instead.