George Smiley #01 - Call for the Dead 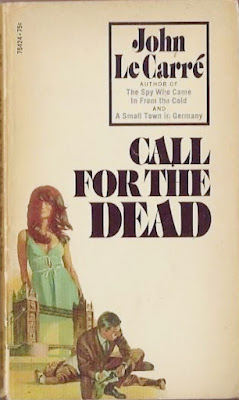 John Le Carre’s real name was David John Moore Cornwell (1931-2020), and he is regarded as one of the fathers of British espionage fiction. His first novel, Call for the Dead (1961), was also the debut of his iconic series character, George Smiley.

The opening chapter is “A Brief History of George Smiley” in which the novel’s hero is said to resemble a poorly-dressed bullfrog. He’s a British Intelligence Officer with the Secret Service and a keen interest in academic incursions into the mysteries of human behavior. He served admirably in Germany during the run up to WW2, recruiting human assets, and now he’s back at the Home Office in London handling administrative tasks including conducting security interviews of employees. In fact, it’s one of those security interviews that kicks off the paperback’s action.

The Service receives an anonymous letter accusing an operative named Samuel Fenman of being part of a Marxist student organization decades ago at Oxford during the 1930s. Smiley handles the security interview and finds no reason to be concerned with Fenman’s adulthood loyalty to the British Crown. The entire conversation is cordial, and Smiley is satisfied that his Foreign Office colleague isn’t a security threat.

For this reason, Smiley is shocked a few days later when Fenman is found dead by suicide. The note he left behind cites Smiley’s benign security interview as the spark that triggered him to blow his brains out. None of this makes much sense to Smiley, who is called into the office by his concerned and confused supervisors. They send Smiley to Fenman’s hometown to visit the widow and determine exactly what occurred.

Smiley quickly comes to the conclusion that Fenman’s death was no suicide, and we have a real mystery on our hands with unknown parties working in the shadows to ensure Smiley fails in his quest to learn the truth. There’s some violence, deceit, and spy tradecraft along the way.

I’d always steered away from LeCarre’s works under the assumption that his writing was dense, slow and hard to follow. It’s certainly British and written with a level of sophistication beyond a Killmaster paperback, but there was nothing impenetrable about this debut novel. It was a perfectly straightforward murder mystery told with the backdrop of Britain’s premier spy agency. While the motivations of many characters involve espionage, the paperback doesn’t particularly read as a spy novel.

Worth reading? I suppose so. Le Carre was a good writer, but there was nothing really special about this debut. It was good enough to make me want to read a pure Smiley espionage classic such as Tinker, Tailor, Soldier, Spy. Others have recommended reading Call for the Dead as a prequel after enjoying the author’s superior spy novels. That strikes me as a good idea.