Conan - The God in the Bowl 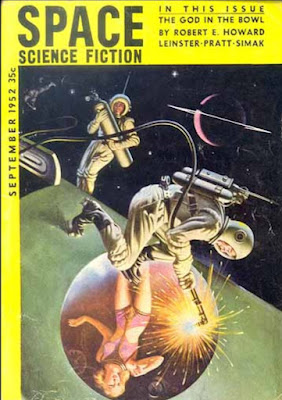 Robert E. Howard's Conan the Cimmerian short story “The God in the Bowl” wasn't published in the author's lifetime. It was rejected by pulp magazine Weird Tales, and after Howard's death, went undiscovered until 1951. It was then edited by L. Sprague de Camp and first published in Space Science-Fiction's September, 1952 issue. It has since appeared in collections like The Coming of Conan (1953), Conan (1967), and Conan of Cimmeria: Volume One (unedited, 2022) among others.

Of the Howard Conan short stories, “The God in the Bowl” is easily one of the strangest. It doesn't really feel like a Conan story and fails to represent what we all know and love about the savage hero, or anti-hero. The premise reveals that “thief” Conan accepts a job from Nemedia's Governor's son to break into an antique house to steal a precious diadem. This diadem is being kept in a sarcophagus that was apparently discovered in the dark realm of Stygia. But why hire Conan? I assume the nobleman owes money for gambling debts or whoring and he wants the job done discreetly and efficiently.

There's a sense of Golden Age Detective fiction when the antique house's overnight clerk is found dead. All fingers point to Conan as the murderer, and in a unique twist, the titular hero is forced to defend himself verbally. The accusation that Conan killed the clerk is hotly debated inside the museum, but as the discussion intensifies, things seem to be amiss. Between the police, the nobleman, and Conan, lies a monster in waiting. By the story's end, Conan is the victor, but it's an odd trip to get there.

Other than the boss fight at the end, and a well-timed decapitation, this isn't your typical Conan story. Howard depicts Conan in a way that makes him seem weak, indisposed, and timid. At one point, the hero struggles with the conversation and is described as just shaking his head in puzzlement. It's similar in the way that Howard describes Conan in “Rogues in the House”. In that story, there's a scene where this priest is explaining a series of tubes he created that uses mirrors to create an illusion. Conan doesn't understand it and dismisses it as witchcraft. There's a difference between savagery and neanderthal dumbness, which is sometimes blurred in these stories, but I also understand that a hint of humor is injected through the befuddlement. That was Howard's intent, but I thought it cast a poor light on the hero here.

Overall, I can recommend “The God in the Bowl”, but there are plenty of other Conan stories you should be reading before this one. Your mileage may vary.

Posted by Paperback Warrior at 12:17 PM