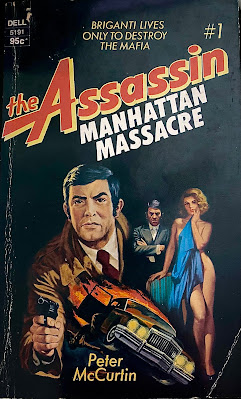 Peter McMurtin authored the three-book series The Assassin for Dell in 1973. Double-dipping into the cookie jar, the author was also employed to write and edit for rival publisher Belmont. McMurtin cleverly used the character he created in this The Assassin trilogy for his long-running The Marksmen series for Belmont. In The Assassin, the character is Robert Briganti while in The Marksmen the name is simply changed to Philip Magellan. Same guy, same origin. Not to totally sweep-kick readers, but some of McMurtin's Sharpshooter series would feature the same character sprinkled in occasionally as Johnny Rock.

This first installment of The Assaassin, titled Manhattan Massacre, plays out like your standard 1970s revenge yarn. There's nothing separating it from an early Bolan, or something akin to Death Wish, The Revenger, The Vigilante, etc. In this origin tale, Robert Briganti is introduced as a former trick shooter that worked the carnival circuit. Later, he began selling arms internationally for a firearms company while having some sort of connection to the CIA. Becoming a family man, Briganti settled down in Connecticut to run a sporting goods store.

A mobster named Joe Coraldi stops into Briganti's store and asks for a favor. He advises Briganti that his particular portion of the empire needs weapons. The deal is Briganti will be paid well, Coraldi gets the boom-boom and all is fair in war. But, Briganti declines the generous offer. Coraldi leaves, then later has his goons shoot up Briganti's car on the highway, shredding wife and kid and somehow sparing Briganti.

Then, two-thirds of the narrative has Briganti arming himself and going after each of the men who murdered his family. The deaths are bloody carpet-soakers with the obligatory leaky heads and destroyed diaphragms. The funny stuff is that Briganti is running around with a monster boner and nearly explodes with one touch from a New York hooker. McMurtin also introduces a wild character named Mwalimu that provides a 14-page lecture to students about alternative history. His take is that Christopher Columbus was black and the reason the slaves willingly came to the U.S. was to get laid by white women. It's nuts, but ties into Briganti's final ploy to kill Coraldi.

If Manhattan Massacre is a sign of things to come, then I'm in for an obnoxious, over-the-top kill-thrill as I waddle my way through two more Assassin entries before stepping over to The Marksmen. If the target is to be entertained with disposable fiction, then McMurtin scored a bullseye.