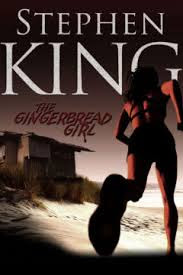 Stephen King’s novella “The Gingerbread Girl” first appeared in the July 2007 issue of Esquire Magazine. It was later compiled into King’s 2008 short story collection, Just After Sunset. The publisher also sells the story separately as a two-hour audiobook.

Our heroine is Emily, and she’s in a pretty bad emotional state due to the recent crib death of her infant daughter. The trauma of her child’s demise triggers the end of her marriage, and the only thing keeping her sane is running.

To regroup and rebuild her life, Emily embarks on a three-week solitude retreat at her father’s “conch shack” on the beach in Florida not too far from Naples. The shack and the beach are pretty isolated, so it’s the perfect place to go for long runs while mourning her kid and contemplating her next moves. She also has time to read vintage paperbacks by Raymond Chandler, Ed McBain and John D. Macdonald.

On one of her jogging jaunts, Emily is overcome with a bout of nosiness and spots a dead girl in the open trunk of a car parked at a house down the beach. Before she can decide what to do, Emily is conked on the head and awakens tied to a chair in the maniac’s kitchen. The villain is the kind of loathsome creep you often encounter in King’s stories, and Emily’s dilemma is not unlike the “escape or die” problems tackled in Misery, Cujo and Gerald’s Game.

The plot is familiar territory for King, and that’s good news for the reader because he’s the absolute best at this kind of tense suspense. In that respect, “The Gingerbread Girl” delivers exactly the kind of scary, bloody, frightening thrills you’ve come to expect from the author. If this one slipped by you, do yourself a favor, circle back, and give it a read. You won’t be disappointed. Highly recommended.