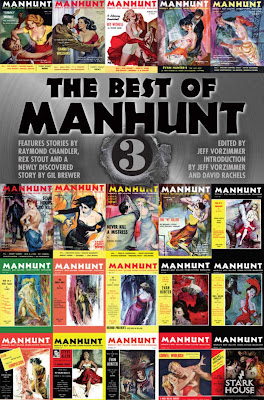 The good people at Stark House Press have blessed us with another compilation of hardboiled crime stories from the pages of Manhunt Magazine, the premier digest for crime noir fiction in the 1950s and 1960s.

The introduction by scholars Jeff Vorzimmer and David Rachels tackles the literary mystery of the identity behind the house name of Roy Carroll, a pseudonym employed by the Manhunt editors when an author had more than one story in a single issue. The thought was that magazine readers desired a great diversity of names in the Table of Contents and would somehow feel ripped off if the same author appeared twice.

Several of the Roy Carroll stories in Manhunt are now known to be written by Robert Turner - but not all. The editors performed some investigative legwork worthy of Paperback Warrior to firmly-establish that the Roy Carroll story appearing in the November 1956 issue under the title “Death Wears a Grey Sweater” was, in fact, written by fan-favorite Gil Brewer for which Brewer was paid a tidy sum of $260.

With that mystery about a mystery solved, it’s only fair that we begin our tour of this anthology with the story itself.

The story opens with the horrific death of an 11 year-old girl in a broad daylight hit-and-run while her father watches helplessly nearby. After verifying that his little girl is, in fact, dead, her dad — his name is Irv Walsh — goes bananas, hops in his car, and begins pursuing the hit-and-run driver. The confrontation with the car occupants goes poorly for Walsh, and his quest for quick justice is thwarted while his desire for revenge burns hot.

As vendetta stories go, this one is pretty dark, gruesome and sadistic. Brewer’s strongest works were his short stories and this one is no exception. It’s a tough and tension-filled read that packs the appropriate emotional punch.

Services Rendered by Jonathan Craig (May 1953)

Henry Callan is a crooked, hard-drinking police lieutenant investigating the murder of a florist. A suspect named Tommy is in custody, but refuses to talk. The dirty cop visits Tommy’s wife and makes her an offer of regular sex with Henry in exchange for Tommy’s freedom and avoidance of the electric chair.

This is the kind of dark and twisted story that made Manhunt great. Jonathan Craig (real name: Frank Smith) is always a reliably great writer, and this story is consistent with his hardboiled output. Don’t skip this one.

Donald Hamilton was the author of the esteemed Matt Helm spy series, but this short story predates his groundbreaking Death of a Citizen by nearly seven years. “Throwback” is an unusual story for both Hamilton and Manhunt as it is a post-apocalyptic story set shortly after the atomic destruction of the USA.

George Hardin and his wife are among the shambling survivors wandering among the smoldering ruins of a freshly-destroyed America. Hamilton’s writing is characteristically beautiful and descriptive. Unfortunately, a coherent plot never comes together, making this story perfectly skippable.

Richard Deming appears twice in this Manhunt compilation, and “The Red Herring” won the coin toss for the prestigious Paperback Warrior review. The story stars a Private Detective named Matt Gannon, who is engaged by a corporate CEO.

The company manufactures a radiation detector similar to a Gieger counter but way more sensitive. The company bought the technology from the inventor for a song, and now the creator is apparently sending threatening notes. Gannon is hired to make the case. As expected, Deming does a fine job with a compelling, if rather standard, PI mystery.

The brain-trust behind these Stark House Manhunt anthologies has another winner on their hands. I hope these collections never stop, and they expand to the other hardboiled magazines that popped up in the wake of Manhunt’s success. These short crime stories are an important part of American literary history and need to be preserved for modern audiences and future generations.