Conan - Rogues in the House 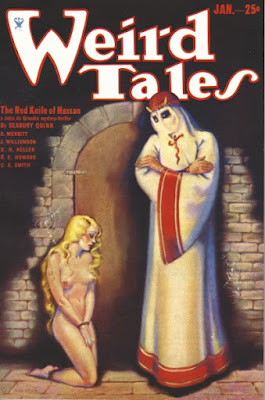 The Conan the Cimmerian short story “Rogues in the House” first appeared in the pulp magazine Weird Tales in January, 1934. That same year, it was also featured in a short story collection, Terror by Night, published by Selwyn and Blount. Other appearances of the story can be found in Skull-Face and Others (1946), More Not at Night (1961), Conan (1967), and The Conan Chronicles (1989). Additionally, the story was adapted into comics by both Marvel and Dark Horse.

A lot of Conan scholars and fans point to “Rogues in the House” as a prime example of Robert E. Howard's literary greatness. Visually, Frank Frazetta's  cover art for the 1967 Lancer paperback Conan depicts the famed scene from the story when Conan is fighting Thak, the hideous ape-creature. That may resonate in some way with fans gravitating to the story as well. But, there's no denying that it is a fantastic Conan offering and one that is certainly treasured for specific reasons.

The premise is that an aristocrat named Murilo has committed illegal affairs with foreign powers. A priest named Nabonidus, who is probably involved in the corruption as well, threatens Murilo by gifting him a box containing a co-worker's bloody ear. Murilo understands that he could be on a hit list and needs protection. Murilo visits Conan, who has been arrested for public intoxication, in the local jail. He bribes him that he will provide an escape as long as Conan agrees to kill Nabonidus that night.

Things don't necessarily go as planned, and the subsequent events all culminate with Murilo, Conan, and Nabonidus all meeting at the priest's cavernous house. In a wild exchange, Conan and Murilo learn that Nabonidus has laid out a number of deadly traps throughout his house to enslave or kill rivals. One of these traps is a large enclosure where Thak, a wild ape-creature, prowls around. When Nabonidus' and Murilo's rivals arrive at the house, the trap is set for Thak to kill them. Again, things don't go as planned and the three are caught in their own trap with the savage Thak.

As I mentioned above, this is a great Conan story with a well designed plot considering the story's length. The political intrigue at the story's beginning propels the story, which leads to a familiar exchange between a government leader and Conan. In stories like “The Hall of the Dead” and “The God in the Bowl”, readers see that Conan is often sought after by government officials or becomes a partner in some sort of heist. This extends that theme with Conan and Murilo's mutual agreement that each needs something the other has – assassination skills and freedom. It's a wonderful criminal balance.

The complex housing structure that Nabonidus has created hosts the bulk of the story. With the addition of Thak, a wild creation by Howard, the story features the inevitable showdown between man and beast. The action is blood-soaked as Conan battles Thak with a razor sharp poniard, a scene that seemingly channels Edgar Rice Burroughs' Tarzan, which was published 22 years before this Conan story. The government treachery, dialogue, and awe-inspiring action is a great blend that easily catapults “Rogues in the House” into the top echelon of Howard's Conan stories. Highly recommended.