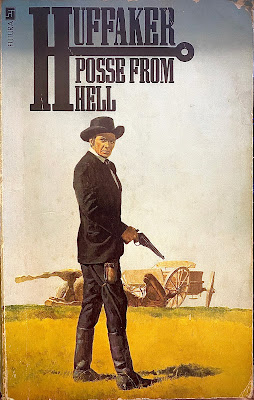 After enjoying Clair Huffaker's (1926-1990) paperback western Seven Ways from Sundown, I was anxious to read another of his books. My biggest obstacle is quantity – I just don't own many of his novels. The other ones I own are a ratty copy of War Wagon, which was adapted into the John Wayne/Kirk Douglas film, and a 1975 Futura paperback edition of Posse from Hell, originally published by Fawcett Gold Medal in 1958. I opted for the latter in hopes that it would be as good as Seven Ways from Sundown. News flash – it was much better!

The book's premise, set-up, and plot development arrives at the novel's first seven pages. There are authors that spend 60 pages just explaining to readers how the plot development will begin. Sometimes that is okay, but for a thin paperback western, I want to gallop quickly. Huffaker is off to the races when four violent men descend on the small, peaceful town of Paradise and unleash a blazing Hell on the population. With shotguns and revolvers, the men kill the lone Sheriff and then take over the local saloon. Like a gritty 1970s men's action-adventure novel, they begin executing these happy townsfolk one by one. After capturing a young woman, then doing what a witness describes as “dirty things to her”, they rob the bank and leave town to take the assault to the next destination, a place called Pineville.

In Chapter Three, readers are introduced to Banner Cole. He is 21 years old, but wise beyond his years. He became a U.S. Deputy Marshall a mere eight days ago. After leaving Paradise for a few days on business, he returns to find the town on fire and bodies seemingly everywhere. The town is quick to point out that he wasn't there when they needed him. They explain what happened, the death of the Sheriff (a friend of Cole's), and that these four men have captured a girl from town. Cole learns that the men are sadistic killers that escaped prison. Surprisingly, they headed in a direction that seemed unlikely.

Cole knows the group's next stop is Pineville and that he will need a posse of at least 20 men. As he starts to ask the most capable men in Paradise's population, the message rings loud and clear – Paradise is filled with cowards. They point their fingers and claim an injustice, but will do nothing to help. The 20-man posse Cole hoped to form turns out to be just six men, one of which is an old retired military leader that is incompetent. Another is a representative of the bank, a man named Kern, that can't even ride a horse properly.

From a sky-level, Posse from Hell's narrative is elementary. It's the good guys tracking the bad guys. But, Huffaker's assemblage of characters is absolutely brilliant. The inner workings of this posse create an interesting combination of very different men with clashing ideas.

The old military man, Captain Brown, is incompetent and cowardly. He constantly scolds Cole on his decision making and at one point nearly has the posse kill an innocent man. Cole and Brown's clash is just brimming over with tension and hostility. Additionally, there's some racist animosity towards Cado, a Native American that Cole can rely on for tracking. Yet, Cado's greatest enemy may be the men he aligned with. Perhaps the best chemistry is developed between Cole and the wet-behind-the-ears corporate businessman Kern. Despite his failure to properly ride a horse, or even shoot straight, his courage is admirable. Facing the most abusive, violent, and torturous events in his life, Kern's heart and endurance is exceptional, proving he is just the man Cole needs. But, his shortcomings could lead to disaster.

As you can gather, I loved this book and found it exciting, purposeful, and just saturated in subtext on humanity and the trials and tribulations we all face. It's not the size of the gun, but the size of the heart. The novel's closing chapters read like an essay on our current times. The lawman in this case faces heavy scrutiny from the public, a condescending, arrogant view on decisions that could have been better in the midst of violent assaults, horrifying conditions, and a grueling attempt to keep justice prevalent. The public is quick to point out what they all would have done differently, yet none of them wanted to actively contribute to the defense of their neighbors, friends, and town. Huffaker's condemnation of hypocrisy and second-guessing professionals isn't lost on the reader, but it doesn't ruin the story either. This is an easy recommendation from me. Posse from Hell will be the best book you've read in ages.

Note - While I'm not a classic movie fan, Posse from Hell was adapted into a film in 1961 starring Audie Murphy and John Saxon.