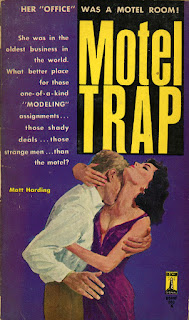 The book is called Motel Trap, with a blurb suggesting its contents are prostitutes, pimps, and sex elements. But, the whole “motel” thing happens on page 147 of 155 pages. You might ask what the first 147 pages of the book are about, right? Try this on for size – its about the pantyhose industry.

Western novelist Lee Floren, who authored Motel Trap under one of his many pseudonyms, Matt Harding, was well outside of his element to tackle softcore, sleazy romance titles. This novel was published by Beacon in 1962, a company that was notorious for hundreds of romance paperbacks, each with gaudy blurbs like, “Her office was a motel room!”

Kudos to Floren for at least attempting to write a serious novel, like Beacon's own Charles Boeckman, who was writing the same type of books for the publisher as Alex Carter. But, unlike Boeckman, Floren's novel is predictable, penned in a pedestrian style that doesn't captivate the reader.

While its not a Hall of Shame candidate, Motel Trap is certainly lodging in the vicinity. Unless you are collecting this stuff, with “artist unknown” cover art, then for God's sake just stay away.

Email ThisBlogThis!Share to TwitterShare to FacebookShare to Pinterest
Labels: Sexy