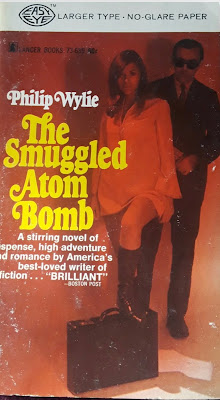 Philip Wylie (1902-1971) was a prolific author of the pulp era whose fiction inspired the creation of the characters Superman and Doc Savage. His 1948 thriller, The Smuggled Atom Bomb, has been reprinted many times over the past 70 years and remains available today.

Duff Bogan is a boarder in the home of the wheelchair-bound widow named Mrs. Yates. Duff is a Physics grad student at the University of Miami, and he loves doing housework and landscaping for Mrs. Yates for reduced rent. The household also features a beauty queen daughter named Eleanor (you see where this is going immediately) and a mysterious tenant named Harry who works for a trucking company.

One day while cleaning the house, Duff notices a new lock on the closet door in Harry’s room. Conveniently for the novel’s plot, Duff is also an amateur locksmith hobbyist. As such, he easily breaks into Harry’s closet where he finds, hidden inside a hatbox, what appears to be a metallic container filled with uranium and what appears to be the core of a small atomic bomb. Could the quiet tenant be a spy or a terrorist?

Duff shares his suspicions with the lovely Eleanor and makes an appointment with the local FBI field office. The special agent conducts a preliminary inquiry and comes to the conclusion that Duff was likely mistaken in his assessment. This basically leaves Duff and Eleanor to solve the mystery themselves - just like an Encyclopedia Brown/Nancy Drew crossover.

Despite the sweet innocence of the amateur sleuthing, Young Duff does a nice job following logical leads in a high-stakes situation. Thankfully, things become a bit more edgy as the story unfolds. The dirty bomb conspiracy was solid, but the interpersonal drama between Duff, Eleanor, and her myriad of suitors was a teen-drama snooze.

The Smuggled Atom Bomb is a basic and straightforward thriller for the easy-reading crowd. The story held my interest, but no one will mistake this for a genre classic. It’s interesting how enduring the paperback has been with multiple reprints over the decades when so many superior works have fallen out of print. At best, this Wylie paperback can be seen as an enjoyable, wispy diversion to be read between more substantial works.