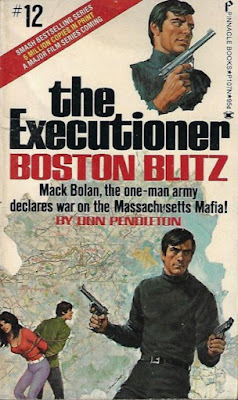 Don Pendleton's The Executioner storms into the American Northeast with its 12th installment, Boston Blitz. After Bolan's flourish of successful run 'n gun tactics on the West Coast, he learns of some troubling news from his old ally and undercover mobster Leo Turrin. Remember Bolan's little brother? That 14 year-old kid named Johnny from the series debut War Against the Mafia? He's been kidnapped from his secretive witness protection blanket at a prep school. Worse, Bolan's “love of his life”, Val, has been captured as well. Remember Val? I don't. But, in looking at the series order, apparently Val was one of three hotties Bolan was banging way back in the debut. I don't remember her since then, but Bolan sure does.

In one of the strangest novels of Pendleton's early contributions, Bolan invades Boston and kills over 60 thugs over the course of 30ish hours. He guns through the strip joints, gambling dives, whore houses, bars, mobster pads, country clubs, and so forth. None of it is really told in a compelling narrative, only mentioned to the reader as past events. The reader is disconnected from the action. It's an odd book, and a bizarre way of presenting the story. My biggest problem with it is that I still don't know what the book was about as I read the last few lines.

From what I can gather, there's a criminal named Al 88 that has risen through the underworld ranks to capture some coveted Boston territory. Harry “The Skipper” Sicilia doesn't want this Al dude to start grabbing huge swaths of prime real-estate, so he kidnaps Johnny and Val to lead Bolan to Boston to start mowing down baddies. Or, did Al 88 kidnap Johnny? None of these people are featured as actual characters in the book (that I can remember), only names dropped in fragmented dialogue. There's Al's wife thrown in the mix that loves her husband, but then helps Bolan's execution. Also added for laughs (?) is this Books Figarone, “Attorney-to-the-Mob”, fellow that Bolan saves and uses as a ploy to lead more mobsters to the chatter gun.

Boston Blitz isn't particularly memorable, but features some old names that we haven't seen in Bolan books for a long time. There's also a mention of Hal Brognola to part the seas and guide Mack Daddy to his next destination, Washington D.C.'s Capitol Hell. Wait, that was a Penetrator novel. But, yeah, D.C. is next for Bolan.