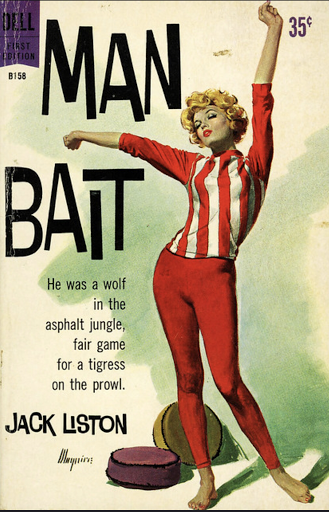 Jack Liston was a pseudonym utilized by Ralph Maloney (1927-1973) for a single Dell paperback in 1960 titled Man Bait. Maloney was a Harvard man who served in the Merchant Marines during World War 2 and in the U.S. Army during the 1950s. His literary output included several highbrow short stories in Atlantic Monthly and six mainstream novels. As such, it wasn’t unusual a guy with his respectable background to employ a pen name when engaged in the disreputable world of pedestrian paperback originals like Man Bait.

Our narrator is Bill Madden and he’s a seaman waylaid by a scorching case of gonorrhea while on vacation in Manhattan. Solid premise. He meets a charismatic and enticing bartender named Marcia immediately after he feels well enough to emerge from his hotel room. Without haste, they become a de facto couple with Marcia showing Bill the hidden nightlife of New York City where boozing, gambling, and sex happen long after the squares have long since gone to sleep.

The prospect of Bill returning to gainful employment on the high seas is remote because of health issues tied to his case of the clap and liver damage caused by booze. Bill needs money because his declining balance of savings is running thin. Enter Sam Brennerman. He’s a mid-level mobster who serves as an intermediary between the various criminal gangs. He’s an affable fellow who knows Marcia from the all-night scene. As Bill’s financial position deteriorates, Sam utilizes Bill as a pawn in a power struggle among old and aspiring crime bosses in New York.

The author was a fine writer but his plotting is pretty bad. This book is painfully slow, and by the time it becomes a crime fiction story, I was past the point of caring much about the fate of the characters. Oregon publisher Armchair Fiction lovingly reprinted Man Bait in 2020, and you should definitely buy the paperback for the alluring cover art. However, I can’t recommend actually opening the book or reading it for anything other than a sleep aid.