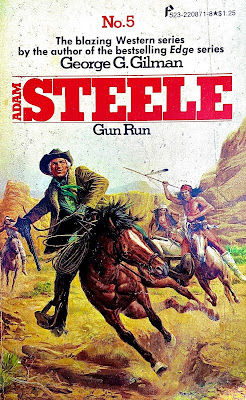 I've really enjoyed nearly everything I've read by British author Terry Harknett. His penchant for bloody, ultra-violent westerns can be found in long-running series titles including Edge, Apache and Adam Steele. I've been on a western kick lately with the Edge titles so I wanted to revisit Harknett's Adam Steele series. I thoroughly enjoyed the character's debut in Rebels and Assassins Die Hard from 1974. I randomly grabbed another series installment from my shelf and ended up with Gun Run, the fifth installment of the series.

The paperback begins with Steele riding shotgun on a stagecoach headed through the perilous Guadalupe Mountains. With a location between American Arizona, New Mexico and Mexican Sonora, the dusty trail is ripe with thieving bandits and savage Native Americans. Within the opening pages, the stagecoach is attacked by a woman and a band of gun-slinging outlaws. They've caught wind that a cache of money is hidden on the coach and want it all for themselves. Steele, who isn't aware the coach was carrying this vast fortune, is robbed along with the passengers, dragged into the desert and left to watch as the bandits ride off with the loot and his signature weapon, the lever-action rifle given to his father by Abraham Lincoln.

Like a blockbuster Hollywood action flick, nearly every chapter of this novel is another over-the-top, rip-roaring adventure with Steele holding his hat on tight while dodging bullets, knives and despicable killers. Determined to retrieve his rifle, Steele heads through the desert with a knife hoping to locate and ambush the gang. Along the way he's captured by Mexican guerrillas, fights Apache warriors, tangles with the Mexican Army before eventually finding himself jailed by a small-town sheriff hellbent on hanging our hero.

I can't help but think that each of these adventure segments in this narrative could have been entire books on their own. Harknett has so many ideas to explore and he seamlessly weaves them all together to make for one highly engrossing and entertaining story. Like his other literary work, the author pulls no punches or knife-thrusts. Gun Run is filled with men, and plenty of women, being tortured, gutted and shot in a rather macabre and grizzly style. No one does westerns quite like Harknett and this book is another exhibit of his crowd-pleasing roughshod style. Highly recommended!