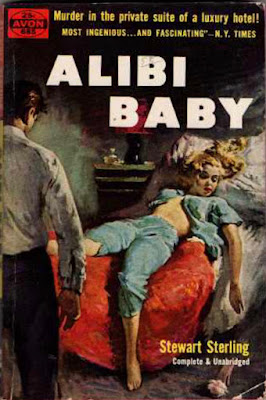 Between 1947 and 1960, Stewart Sterling (a pseudonym of Prentice Winchell) authored an eight-book series starring Manhattan hotel detective Gil Vine, the security man and troubleshooter at the high-end Plaza Royale. Since the series order doesn’t matter, I’m starting with the fourth installment, Alibi Baby from 1955.

The novel opens with Gil being summoned to a suite on the hotel’s expensive 32nd floor. The suite was rented by two twentysomething sisters. While one sister was out nightclubbing, the sister who stayed behind claims to have been sexually assaulted by a strange intruder in her hotel room. She provides Gil with a description of her rapist before she is sedated and taken to the hospital.

This presents a professional and ethical dilemma for Gil. He understands that rape is serious business, and the right thing to do is call the police. However, with no signs of forced entry, the hysterical girl’s story doesn’t make much sense. Moreover, Gil’s job is to protect the guests as well as the reputation of the Plaza Royale. Another wrinkle is that the girl’s description of the rapist matches the guest across the hall, a multi-millionaire French oil magnate. Inconveniently, the Frenchman is nowhere to be found when Gil knocks on his door.

The author provides fascinating insights into the hotel business and the legalities surrounding the hotel detective role. In fact, Sterling co-authored a non-fiction tell-all book about the career titled, I Was a House Detective. Without question, much of his research for that book worked its way into his Gil Vine novels. You learn about the hierarchy of hotel waiters with room service at the top and temporary banquet servers at the bottom. The hotel’s telephone switchboard operator is a nosy but fantastic source of information for Gil as he tries to get to the bottom of the alleged sexual assault.

Alibi Baby is a competent whodunnit mystery novel where nothing is as it initially seems. Gil Vine is an affable narrator, and it’s fun to have a guy working to solve a violent crime who is neither a private eye or a cop. The book has been reprinted on Kindle and Audible, and fans of intricate hardboiled mysteries will certainly enjoy this one. Recommended.