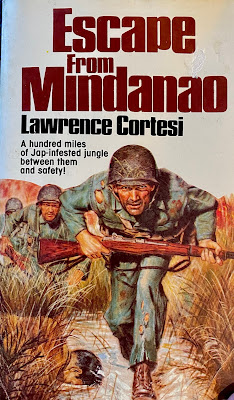 Author Lawrence Cortesi (real name Lawrence Cerri) authored a number of war novels in the 1970s and 1980s. Based on his own military experience in WW2, most of Cortesi's novels are geared towards aerial and nautical campaigns in the South Pacific Theater. My only experience with the author was his 1979 paperback Rogue Sergeant. I wasn't impressed with it but felt the author deserved a second chance. That opportunity came when I acquired his 1978 paperback Escape from Mindanao.

The novel's action is set in 1942 in the highly contested Philippines. Historically, three years later the U.S. would commit to Operation Victor V to fully liberate the country from Japanese occupation. In the book's opening pages, the American battered 7th Bomb Group are packing up to fly out 200 airmen from the northern area of the country. Afterwards, they will destroy the runway and remaining supplies, so the enemy forces can't offensively utilize them.

Cortesi's narrative begins to unfold when the bombing is are just set to depart. Through radio chatter, they learn that 600 American and Philippines guerrilla fighters have somehow miraculously escaped from the heavily fortified northern country of Luzon (Manila) and are headed their way for reinforcements, supplies and much needed rest. Faced with an extreme decision, the group can't wait for the large force to arrive and they can't obtain aerial support large enough to recover 600 servicemen. Forced to abandon the group, they radio to the servicemen that if the soldiers can somehow make it another 100 miles to the southern coast, they will find gunships that can safely carry them to Australia.

Escape from Mindanao is only 190-pages but is epic in design and presentation. The book works from four different perspectives – the airmen forced to leave the advancing group, the ground forces that make up the 600 determined travelers, Japanese commanders and the wife of one of the guerrilla fighters. Together, the story is weaved together through these various segments. Cortesi's strength as an aerial and nautical storyteller helps to navigate what otherwise would be a rather complicated narration. The novel's various plot elements became a smooth, easily entertaining read.

Escape from Mindanao should be well received by military fiction fans but can also work as a stylish jungle adventure. It's dynamic, rather unique and action-soaked both on the ground and in the air. After the rather dull Rogue Sergeant experience, I'm glad I have found favor with Lawrence Cortesi. He has a robust body of work, and I'm now anxious to explore it further.