One for the Road 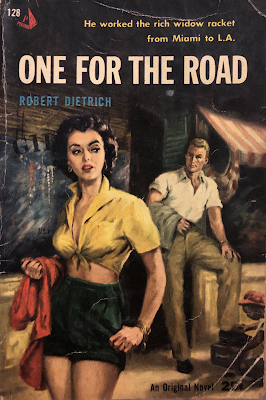 Conventional wisdom says that the best books by former CIA operative and Watergate burglar Howard Hunt were the ones he wrote under the pseudonym Robert Dietrich. One for the Road is a 1954 stand-alone crime-noir novel that has been re-released by Cutting Edge in trade paperback and ebook formats.

One for the Road begins in the Florida gulf coast town of De Soto, populated by mosquitoes, sea turtles, and rich widows. The old dames are the draw for our narrator, a con-artist and Korean War vet named Larry Roberts, who grew up a poor orphan and has decided to spend his adult life remedying that by latching onto a rich sugar mama and then disappearing with her money. He meets a 40 year-old wealthy woman named Sophie with a smoking hot body and a decent face. Even better: her husband has been dead for a year.

So Larry is a bit of a heel and a misogynist. He’s also charming, clever, funny and unrepentant. You hate yourself for liking him as much as you do - especially when he’s conning money out of an otherwise nice and loving lady. Getting rich quick and dishonestly isn’t a noble pursuit, but it definitely makes for compelling reading. As the paperback progresses, a cool gambling subplot becomes a major source of tension and anxiety for both Larry and the reader before settling into a rather typical femme fatale story.

The coolest things about this thin paperback were the innovative story arcs and vivid settings. Larry covers a lot of ground in the novel, which basically weaves three separate plots into an overarching narrative. I read a lot of these books, and I had no idea where this one was heading. The plotting was just masterful.

Of the Howard Hunt books I’ve read, One for the Road is the best of the bunch by a country mile. There’s sex, violence, duplicity and intrigue. I’m thrilled to see this paperback has made a comeback for modern audiences. This is the vintage novel you deserve. Highly recommended.