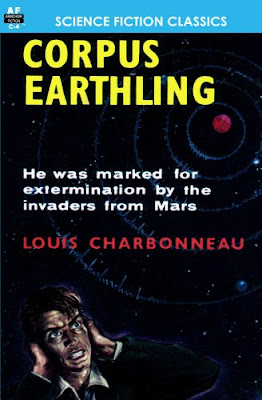 Louis Charbonneau (1924-2017) was a highly-regarded author of horror, western, crime and science fiction with a knack for propulsive plotting and claustrophobic settings. My first exposure to his science fiction work is his 1960 novel, Corpus Earthling, which was adapted into an episode of The Outer Limits in 1963 starring Robert Culp. The novel has been reprinted by Oregon publisher Armchair Fiction.

Our narrator is UCLA college professor Paul Cameron, and he’s hearing voices in his head. He first assumes it’s a form of madness, but it sounds like his mind is somehow intercepting a transmission not intended for Paul’s inner ear. It’s nothing particularly coherent - mostly just sentence fragments and phrases without much context. However, things get scary for Paul when he overhears the voice in his head declare, “Someone is listening.” Is Paul the someone? If so, who is the speaker? The bits and pieces Paul catches over the next few weeks make it clear that whoever is speaking is desperate to find and eliminate Paul for listening to a conversation he was never intended to hear.

It’s the not-too-distant future, and America is gearing up for its second manned mission to Mars. Both cover art variations of the paperback give away that the Martians are the hostile menace that Paul is intercepting. Science fiction has always had a bias towards alien invasions using gleaming spaceships, but the author of Corpus Earthling has a different vision of hostile invaders - one arising from the tropes of demonic horror fiction - invasion through possession.

When Paul’s mind isn’t occupied by interstellar eavesdropping, it’s focused on his sexy new neighbor, Erika and his seductive student Laurie. For a guy trying to save the world from a Martian invasion, he spends a lot of time also trying to get laid. I’ve never been in his position, so I probably shouldn’t judge.

If you’re familiar with the story structure of a typical 1960 crime noir novel, you’ll feel right at home with Corpus Earthling. The paperback has mystery, melodrama, non-graphic sex, action, a femme fatale, a religious cult and a manipulative foe. It definitely draws from a pulp fiction tradition as opposed to the overly-smart SF epics of Robert Heinlein or Frank Herbert. Overall, the short paperback was a lot of fun to read, and further cemented Louis Charbonneau as one of my favorite new discoveries of 2020.